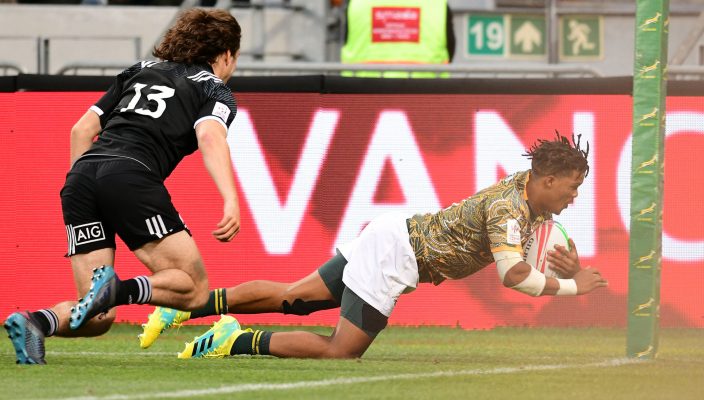 The younger generation of Blitzboks again showed in Cape Town that they are indeed more than capable to swim at the deep end of the HSBC World Sevens Series pool, according to Dewald Human, one of the newer players in the Springbok Sevens set-up.

And with a number of Blitzbok stalwarts picking up injuries over the weekend, the next generation of players may be thrust into the spotlight again as the team set their sights on the next two tournaments, in a couple of weeks’ time in New Zealand and Australia.

Werner Kok suffered some facial fractures and will undergo surgery on Monday. He is expected to make a full recovery for the next leg of the HSBC World Rugby Sevens Series, in Hamilton at the end of January 2019.

Justin Geduld will have a procedure on Tuesday to remove cartilage from his knee, while the Blitzboks’ medical staff are awaiting the results of scans on Philip Snyman (shoulder) and Muller du Plessis (rib), neither of whom featured on the second day.

An update on the availability of Geduld, Snyman and Du Plessis for the Hamilton tournament will be made in due course.

Du Plessis was one of the young guns who first took a dip in Hong Kong in March and finished third, a result that proved crucial as the Blitzboks retained their World Series crown.

The young guns excelled yet again, with the likes of Human and Davids showing that they are willing and able to join Cecil Afrika and Branco du Preez – both with more than 60 tournaments of experience – and Justin Geduld in the playmaking role sooner rather than later.

Human, who captained the Blitzboks to Hong Kong earlier this year, said they accept that playing opportunities could be few and far between, and realise the importance of grabbing the opportunity when offered.

“I am back-up to Rosko Specman and he is world class,” said Human, who scored the decisive try against the All Blacks Sevens in the bronze final on Sunday.

“So the challenge will be to make sure I can play at that level when my chance comes.”

With Specman now moving on to fifteens, the former Outeniqua High School pupil could just get a more permanent spot in the team.

“We work hard to get the results and although we just missed out in Cape Town, I think we are satisfied with the growth we showed in the first two weeks of competition.”

The match-winning try against New Zealand was Human’s ninth in 26 matches and one of 21 tries scored by South Africa (fifth overall for the tournament) in Cape Town.

Kok (29) is tied third on the list for most tackles so far in the series and Impi Visser fifth with 27 tackles.