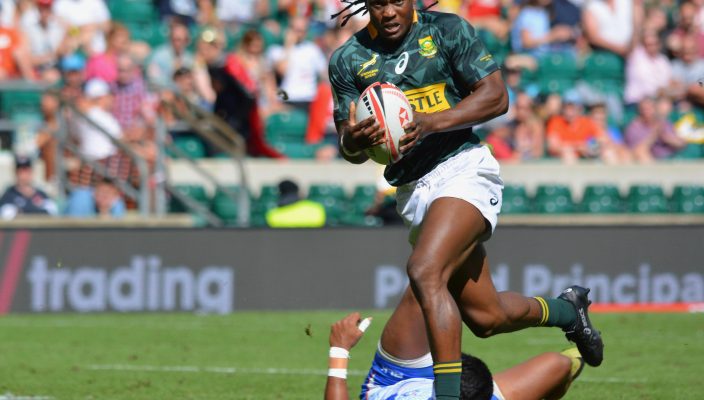 The Springbok Sevens team will face New Zealand in the Cup quarterfinals of the HSBC London Sevens on Sunday after finishing top of pool D after Day One at Twickenham.

The Blitzboks on Saturday scored wins over Russia (31-0) and Canada (17-7) before they tripped up 21-12 against Samoa in their final pool D match of the day. Due to other results in the pool though, the Blitzboks still finished top, followed by Canada.

Springbok Sevens coach, Neil Powell, was far from pleased with his team’s performance though.

“It was disappointing losing to Samoa, but even more so because we did not bring the effort as a team. That is not who we are as a team. We could not find any momentum all day. Against Samoa our problems were compounded by lots of individual errors.”

Powell said they would regroup and come back stronger.

“This is now time to get together as a team, regroup and show that we really want to remain the champions. The quarterfinals will be tough, as New Zealand play with a lot of confidence. We need to play at least four times better than today if we want to make an impact on Sunday,” Powell said.

Against Russia, the Blitzboks scored four tries in the first half to lead 24-0 at the break. The second half saw a better defensive effort from Russia, with only Zain Davids managed to cross their line.

Against Canada, a try by Ryan Oosthuizen gave his team a 7-0 lead at halftime, before a try by Philip Snyman edged the Blitzboks 12-0 ahead. Canada scored a converted try with a minute left on the clock, but Werner Kok eased the worries with a try and a 17-7 win.

The Blitzboks conceded two early tries against Samoa, with a number of weak tackles exploited by their opponents. Heino Bezuidenhout got one back for his team, but a third by Samoa jumped them into a 21-5 lead at the break.

The second half saw a number of unforced errors, but a jewel by Seabelo Senatla, in which he raced through from 80 meters out, gave his team a sniff.

Samoa held out though for a very good win.