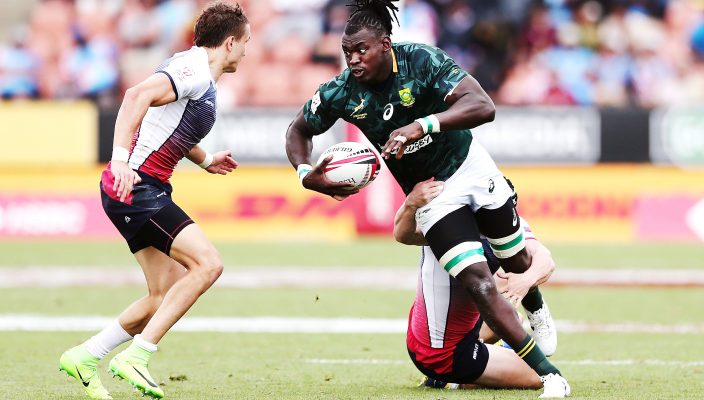 Blitzboks to face Scotland in Cup quarters of NZ Sevens

The Springbok Sevens team on Saturday topped pool B of the HSBC NZ Sevens in Hamilton after beating Papua New Guinea (36-5), Russia (38-0) and England (28-7) in the FMG Stadium and will face Scotland in the Cup quarterfinals on Sunday.

The defending HSBC World Rugby Sevens Series champions started the fourth tournament of the 2017/18 series with a workmanlike win over PNG, but started to hit their straps in the second half of their clash against Russia. In their final pool match, against England, the Blitzboks scored four unanswered tries on route to a convincing win.

Only South Africa, Fiji and New Zealand were undefeated on Day One, with the South Africans topping the points’ log, scoring 102 points on Day One and only conceding 10.

“Yes, to be honest, there were a couple of wobbly moments in those opening matches, not sure why the guys could not settle the nerves early on,” Kyle Brown, the South African captain at the tournament, said.

“We did start to play with more urgency in that second half against Russia and were clinical against England. We will need more of that accuracy, come Sunday,” Brown said.

“Our defence was tested out there today. That is the cornerstone of our game and we implement that well. We did have some good strong one-on-one tackles out there. All the hard work of Day One will mean nothing though if we don’t bring our best in the knock-outs.”

The day ended with a bit of a dampener, with Dylan Sage ruled out of contention for Day Two of the tournament after taking a knock against the head in the match against England.

Kwagga Smith will replace him for Sunday’s knockout rounds.

Branco du Preez, who only joined the squad in the early hours of the morning after being called from South Africa as a replacement, admitted that he could have done with a bit more sleep.

“Yes, I came in late and it was up early this morning, but the guys did well to keep me awake,” Du Preez smiled.

The 58-tournament veteran missed the original trip to Australasia due to a strained hamstring, but was pleased to join the squad 20 days later.

“It is always nice to be part of the squad and to contribute to their effort,” he said.

•Head to Head: The Blitzboks have played Scotland 43 times, winning 37 of those with an average score of 26-10. They last played each other in May 2017 in Paris, where South Africa won 15-5.

•Points Scorers: Seabelo Senatla and Rosko Specman ended top of the points’ scoring list after Day One. Specman scored a brace against Papua New Guinea and Russia and a try against England for his personal tally of 25, while Senatla scored two tries in each of the three matches played for his 30 points contribution. Justin Geduld converted 10 of the 16 tries scored and Cecil Afrika 1.

The draw for the Cup quarterfinals on Sunday (SA times) are: