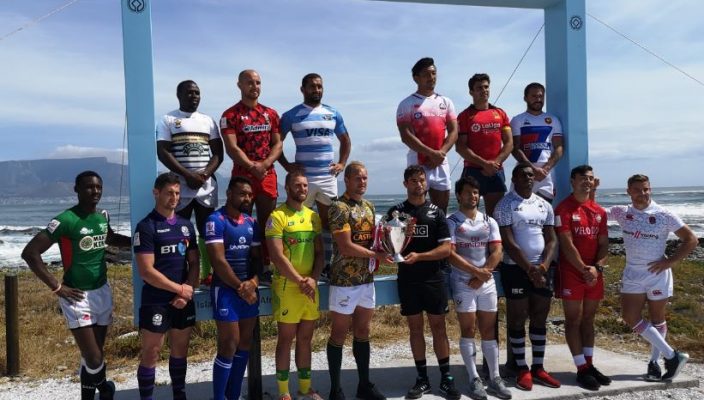 The Blitzboks will draw energy from the expected full house at the Cape Town Stadium when the second of ten HSBC World Rugby Sevens Series tournaments kicks off in in Cape Town on Saturday.
Springbok Sevens captain, Philip Snyman, said they are keen to get going at the HSBC Cape Town Sevens this weekend, where they will meet Zimbabwe, Samoa and New Zealand in pool A on the opening day.
Snyman attended the official captains’ photo on Robben Island on Tuesday wearing the commemorative match jersey, which they will play in this weekend.
The special motif jersey serves as a tribute to late president Nelson Mandela’s 100th birthday celebrations. Snyman said that would boost their motivation on the field.
“It was very emotional standing on Robben Island, wearing this special jersey,” said Snyman. “We all celebrate the role Madiba played as the Father of the Nation, and this jersey will add to our motivation.

“Similarly to that which our late Mr Mandela envisaged, the Blitzboks are a team that want to inspire and give hope to people, and to use our abilities on the field to bring the nation together.”
Snyman said that deep desire, combined with the need to improve on their efforts in Dubai last week, will drive them at the HSBC Cape Town Sevens.
“We want to play to our potential for ourselves and for everyone out there. That is a given,” he said.
The expected sell-out crowd will also boost their energy levels, said the captain.
“We will be playing in front of 50 odd thousand people each day in the only weekend we get to play in our own country. That is massive for us.

“More importantly though, is that we will also be playing with the support of 50 million people, and we are hoping to make all of them proud.”
Snyman was confident that they would be able to make the necessary tweaks to improve on their sixth-place finish in Dubai.
“Coach Neil Powell has a plan or two up his sleeve and I think we will be very competitive this weekend,” said Snyman. “Running out there with the support of the country, wearing this special jersey will be a fantastic occasion. We can’t wait.”