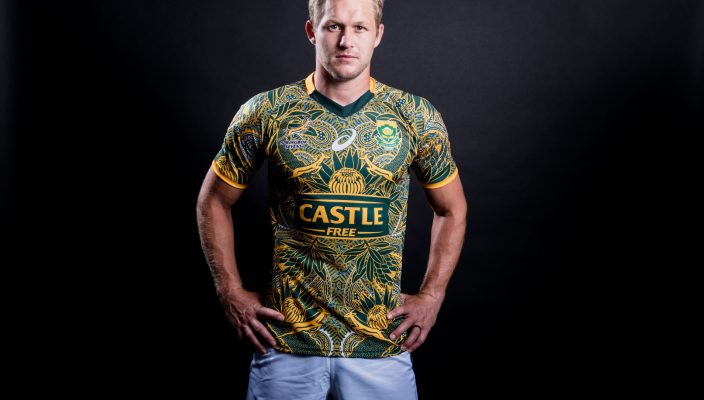 Blitzboks to honour Madiba in special jersey in Cape Town

The Springbok Sevens team will join in the centenary celebrations of the life of the late Mr Nelson Mandela by playing in a specially designed Madiba-jerseys at the HSBC Cape Town Sevens this weekend.

Mr Mandela would have turned 100 years old in 2018. He passed away on 5 December 2013 and three days later, the Blitzboks dedicated their Port Elizabeth tournament victory at the Nelson Mandela Bay Stadium to his memory.

The idea to play in the Madiba-style jerseys originated with team sponsor Castle Free and along with SA Rugby, ASICS, the official apparel and footwear supplier to South Africa’s national teams, and the Nelson Mandela Foundation rolled up sleeves to make it happen.

The jersey takes its green-and-gold design inspiration from the intricately patterned shirts Madiba was famous for wearing.

“The entire country celebrated the life of Mr Nelson Mandela this year and we’re honoured to also have an opportunity to pay our respects as in this specially designed ‘Madiba’ jersey as part of SA Rugby’s contribution to the centenary celebrations of our first democratically-elected president,” said Philip Snyman, captain of the Blitzboks.

“The idea of designing these iconic jersey’s is the brand’s way of honouring Madiba’s legacy,” said Croeser.

“We hope this uniquely designed jersey serves as an inspiration to the boys for their forthcoming encounter on Saturday.”

Castle Free is the country’s first home-grown 0.0% alcoholic beer and proud sponsor of the National Rugby Sevens teams. This beer variant promotes inclusivity and unity amongst all South Africans.

A limited release of 350 of these ASICS-manufactured jerseys have been made available through regular retail outlets countrywide.