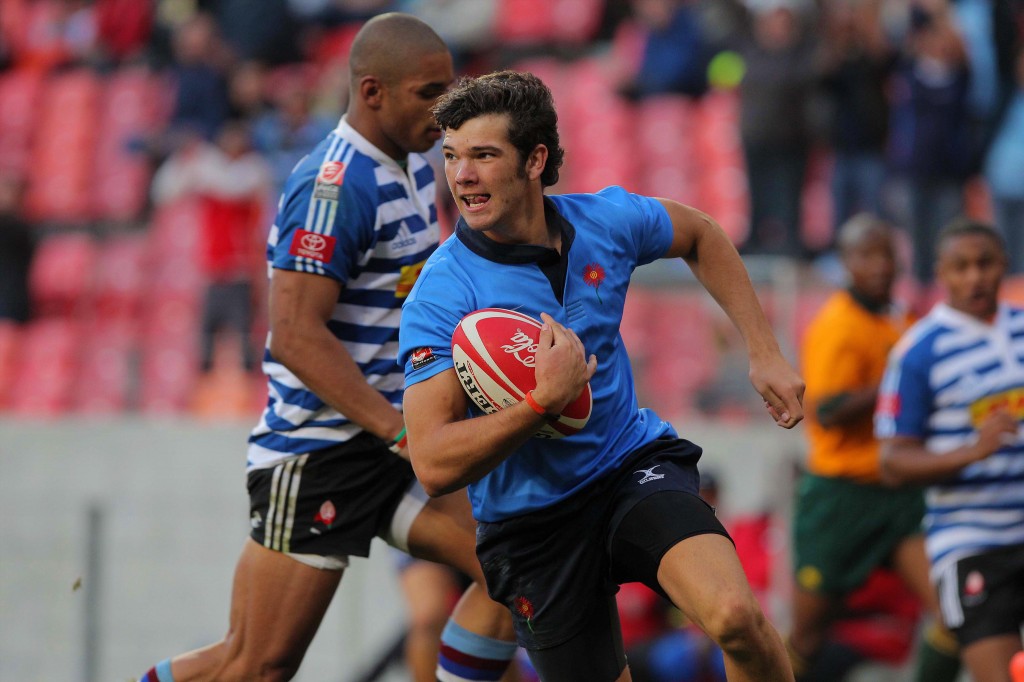 Jaco Hayward of the Blue Bulls put the final the nail in the Western Province coffin as he went over for a try shortly before the final whistle. Photo by Carl Fourie /Gallo.

THE Blue Bulls raised the bar on the second day of the Coca-Cola Under-18 Craven Week at the Nelson Mandela Bay Stadium in Port Elizabeth when they scored 21 unanswered second-half points to beat Western Province 47-27 in the day’s main match.

The Bulls trailed 27-26 at the break, but three converted tries in the 56th, 59th and 61st minutes took the wind out of WP’s sails and firmly established the boys from Pretoria as the team to beat at the country’s flagship Youth Week.

With hosts EP and KZN producing scintillating rugby on Monday in beating the Valke 41-17 and Free State 48-24 respectively, the Bulls and WP had their work cut out to match those exploits and they promptly delivered in a high-tempo game that saw 10 tries being scored.

There were also wins on Tuesday for Zimbabwe, EP Country Districts, SWD and the Pumas.

In the main match, WP, who have played in the tournament’s unofficial final for the past three years, got off to the best possible start when eighthman Petrus Bothma crashed over in the third minute.

SA U20 Junior World Cup-winning flyhalf, Handrè Pollard, kicked the conversion, but the goal was soon cancelled out when loosehead prop Pierre Schoeman barged over from a tapped penalty five meters from the WP line.

Flyhalf Ryno Eksteen made it 7-7, but Pollard kicked a 14th-minute penalty to put WP in the lead once again. The Cape boys increased their lead to 10 soon after when fullback Jason Worrall scooted through for Pollard to convert from the touchline.

But the Bulls were equal to the task with centre Rohan Janse van Rensburg muscling his way over underneath the posts for a converted try to cut the deficit to 14-17, which soon became 21-17 to the boys in blue when Marcus Kleinbooi went over from a sweeping attack.

The sides continued their tit-for-tat scoring, WP hooker Chad Solomon and Bulls prop Dayan van der Westhuizen going over before Pollard nailed a 34th-minute penalty to give his side a one-point lead at the break.

After the deluge of points in the opening period, the scoreboard operator was left twiddling his thumbs until 21 minutes into the second half, when 21 points in a matter of five minutes were chalked up, starting with Bulls centre Jurie Linde putting his side ahead after a good buildup down the left-hand touchline.

No sooner had Eksteen converted than it was fullback Jaco Hayward who danced over on the hour to make it 40-27, followed a minute later by a second try to Kleinbooi to put the result beyond doubt.

The main curtain-raiser, between the Pumas and the Griffons, produced another 10-try thriller after the Northern Free State side produced a stirring second-half comeback.

The Griffons trailed 31-5 at one stage but three quick tries, to flanker Andre Jansen van Vuuren, wing David Tippens and centre Shaun Reynolds, made it a seven-point game with six minutes remaining.

But the boys from Mpumalanga, who played superb rugby in the first half, finished strongly, dotting down twice in the dying minutes to claim a deserved 48-24 victory.