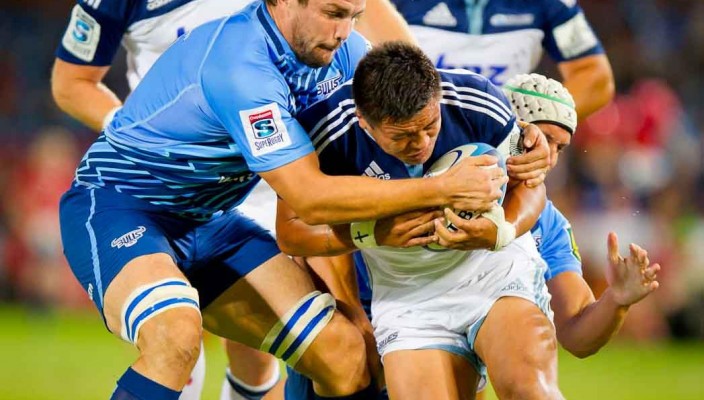 Blues Head Coach Sir John Kirwan unveiled his 2014 squad at a breakfast event exclusively for members and sponsors at Eden Park this morning.

Kirwan said he was excited about a much more balanced squad in 2014 as he heads into his second campaign in charge along with fellow coaches Sir Graham Henry, Grant Doorey, Mick Byrne and Nick White.

“After our first season we had a really long look at what we needed and that was a little bit more experience to complement the excitement of our young guys,” Kirwan said.

“What we’ve tried to do is bring in some of that experience and keep the excitement so you’ll see the squad is a lot more balanced but we’ve also kept a lot of youth, especially in the Wider Training Group.”

That experience comes in the form of World Cup winning All Blacks Jerome Kaino, Tony Woodcock and Ma’a Nonu who have all returned to the franchise following stints away.

“Woody’s had a year away and I see him as one of our main franchise guys. He’s had his OE and he’s back with us and he’ll really shore up that front row which is great,” Kirwan said.

“Getting Jerome back is outstanding for us, he’s been overseas but he realized that he still has dreams of being an All Black and wants to be a Blues man and really contribute to helping the squad.

“Ma’a is excited to come back to the Blues. We’ve got Ces (Francis Saili) there but Ma’a just brings a whole lot of experience and is obviously world class so I think that balance will work well.”

“Tom is a great reader of the lineouts, he’s been around the traps a wee bit and he’s relishing a new challenge. He’ll really add to our locking intelligence which is what we need.

“I think the whole country is excited about someone like Patrick Tuipulotu. He’s been in the New Zealand Under-20s, was a big contributor there and before getting injured during the ITM Cup we saw what he could do on that stage. He’s a new kid on the block but he’s also ready physically and hopefully mentally he’ll step straight up and put some pressure on the other guys.

“And of course Benji Marshall – everyone’s really excited about his involvement. He’s already been in the organization and everyone is impressed with his professionalism and what he’s going to bring so it’s going to be great to see him grow into it.”

Both Pita Ahki and Lolagi Visinia have graduated from the Wider Training Group to join the main squad in 2014, paving the way for an exciting new crop of players such as Tevita Li, Simon Hickey and Tom Murday to join the extended squad.

After briefly leading the Blues in 2012 in the absence of Keven Mealamu, Luke Braid has been named captain of the side for 2014.

“We just think he’s the type of guy we need from an attitude point of view,” Kirwan said.

“He’s not scared to drive high quality at training, he’s not scared of anyone so he’ll challenge people including the coaching staff and I think the consistency of his rugby is great for all of us. I think he’s really going to grow into that role and I know he’s really looking forward to the challenge.”

Kirwan said after showing plenty of promise in his inaugural year at the helm, there would be mounting expectations for the Blues to deliver in 2014.

“Last year we talked about a rollercoaster and I think this year we need to talk about consistency of performance while on the rollercoaster – we don’t want too many of the dips but we want to enjoy the highs and excitement of what a rollercoaster can offer.”