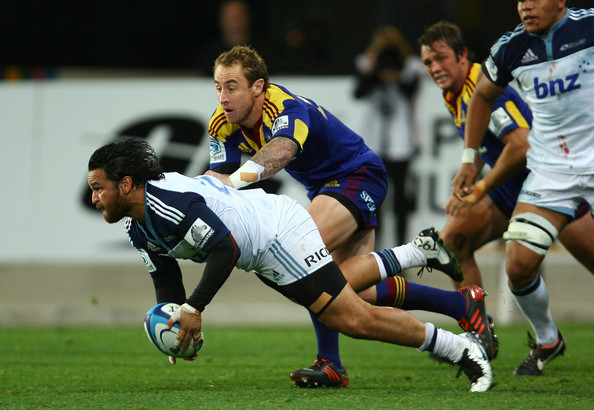 A much fitter and trimmer Piri Weepu will make his first appearance of the season when the Blues tackle the Highlanders in Queenstown. Photo by Getty Images.

Piri Weepu will make his first appearance of the year for the Blues on Friday when they take on the Highlanders in Queenstown in their final pre-season hit-out.

The World Cup winning halfback has been in great shape since returning to the squad at the end of January and is looking forward to pulling on the number nine jersey.

“It’ll be good to go down there and have a trot,” Weepu said.

“I watched last week’s game and how quick the boys were playing so it’s going to be good, it’s really exciting.”

Weepu said he was a lot more motivated to make a difference this year as one of the few experienced players in a young squad.

“I’m pretty motivated to make sure I play a bigger role than last year,” he said.

“I’ve done a lot of work outside the camp to get myself in better nick than I was last year. I’ve been trying to maintain that and make sure that when I come into camp I’m not behind the boys.

“I want to help out these younger boys a lot more, not just by saying it but by doing it as well. I guess it’s going to be a key role that I’m going to have to take on because the average age in the backline isn’t 27, it’s 21 or 22 so I need to pass on my knowledge to anyone in the backline in terms of guidance and making them understand what it’s like to be a professional rugby player.”

“He’s shown great leadership, great guidance of the young guys and great input into what we’re doing as a team.

“I didn’t know Piri (before I started coaching the Blues), I’d heard a lot of great things about him in the environment but he’s actually been brilliant.”

Weepu returns to a near full-strength side to take on the Highlanders in the Blues’ final pre-season match of the year, with Charlie Faumuina making his first start at tighthead prop and Charles Piutau returning from injury to line up at fullback.

However Kirwan said there were still opportunities for players to push their claims for selection in the first competition match against the Hurricanes on February 23.

“We’re trying to give everyone an equal amount of game time. Our goal as coaches was to make sure that we’re being put under pressure for selection. Some guys are not going down there that have already put us under pressure, other guys need to keep performing so we’re hoping to be under pressure to pick a starting side on Saturday morning.”

The Blues team to face the Highlanders at the Queenstown Events Centre on Friday (kick-off 5.30pm) is: