Weepu to play 100th against the Canes 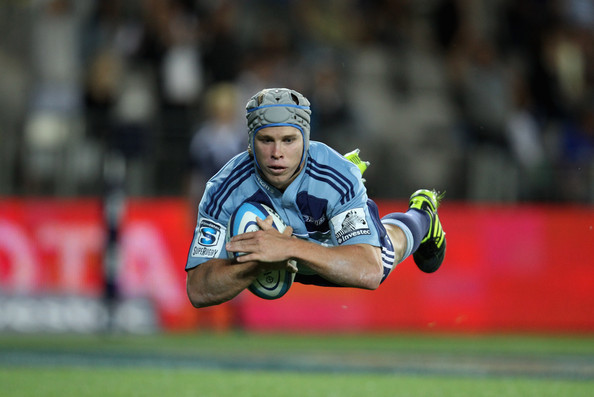 Lachie Munro flying over for a try against the Hurricanes when the two sides met back in 2011. Photo by Getty Images.

Blues head coach SirJohn Kirwanhas announced his side to take on the Hurricanes in their season opener at Westpac Stadium on Saturday night (kick-off 7.35pm).

After three months of gruelling pre-season training, Kirwan said he couldn’t wait to kick off the season and revealed how difficult it was to select his first starting XV.

“It was really tough, there are some really unlucky guys and I think that’s how it should be,” Kirwan said.

“One of the things we asked the players was to put us under pressure to get selected. When we started in December I thought ‘well this is going to be interesting’ but everyone has put their hands up, there wasn’t one player in the team that wasn’t considered except for Anthony Boric who is still coming back from injury so that’s a pretty good situation to be in.”

All Black halfback Piri Weepu will play his 100th Super Rugby game against his old franchise in his hometown, while Rene Ranger will bring up his 50th game starting at centre.

Kirwan said it would be a special night for two of his most experienced players.

“It’s a special achievement for Piri in front of his whanau and against his old team. It was an emotional place for him to leave but we’re proud he’ll be playing his 100th Super Rugby game for us in front of his family with his new family.

“We’ve also got Rene’s 50th game. He’s a Blues man and played every single one of his 50 games with us so it’s a special night for him too. It’s just really important that all the guys do their jobs, these milestones are important and they’re important if we put in a good performance.”

Chris Noakes has been given the nod at first five-eighths ahead of Baden Kerr and will make his first appearance in a Blues jersey, while Culum Retallick will also play his first game for the Blues at lock.

Kirwan said the decision to pick his starting first-five was particularly difficult.

“There was some really good competition there,” he said.

“I think Chris brings us that experience we need and he’s driving the football team well. Baden has just really improved week after week. He came into the side and was probably not expressing himself as well as he could, but he’s certainly been living up to our motto ‘better never stops’ so there’s good pressure.”

On the bench, Brendon O’Connor, Bryn Hall and Baden Kerr are poised to make their Super Rugby debuts, while Quentin MacDonald and Jackson Willison may also make their first appearances in a Blues jersey.

Kirwan said he was expecting a fierce challenge from a strong Hurricanes outfit.

“It’s a good side. They’ve come off a couple of rebuilding years and they’re feeling like they’re ready to explode so I put them as firm favourites and us as underdogs so we’ve got nothing to lose. We’re going to go out there, express ourselves and enjoy it.”

The Blues team to face the Hurricanes at Westpac Stadium,Wellington on Saturday night (kick-off 7.35pm) is: