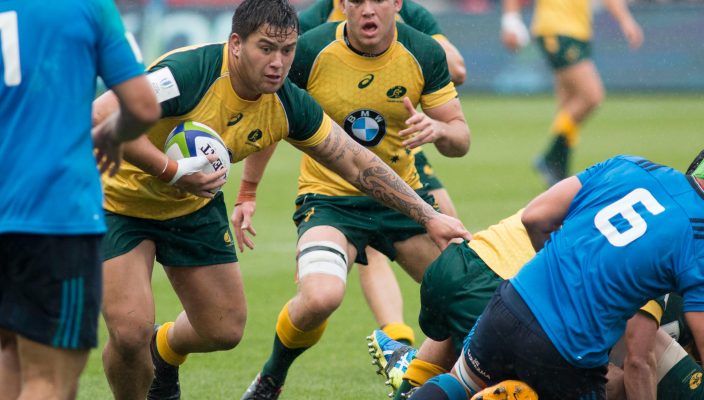 The BMW Australia U20s have secured their first win of the World Rugby U20s Championship, with a 38-10 win over Italy at AJ Bell Stadium in Salford on Saturday night.

The Australian U20s outscored the Italians five tries to one, with Simon Kennewell, Lukhan Tui, Liam Jurd, Shambeckler Vui and Mack Mason all crossing over. Mason also slotted six from seven attempts with the boot.

Australia U20s Head coach Adrian Thompson: “It was great to get the bonus point win today. The boys worked hard at training this week and to get over the line today is reward for their efforts.

“The Italians came out really strong in the first half and played a really physical game, but the players showed patience and made the most of their opportunities in the second half.

“The bench had a massive impact on the game today, with three from five tries coming from our reserves. You want your reserve players to come on as finishers and that is exactly what those players did for us today.”

The opening 10 minutes of the match tested both forward packs, with numerous scrums packed in the damp conditions.

The Italians opened up the scoring in the 10th minute through a penalty to flyhalf Leonardo Mantelli. Mason missed a penalty attempt to level the score two minutes later, leaving Italy ahead 3-nil.

The score would remain the same until Italian fullback Matteo Minozzi crossed off the back of a passage of broken play. Mantelli slotted the conversion to give the Italians a 10-nil lead in the 28th minute.

Simon Kennewell crossed for the Australian’s first try in the 34th minute, which Mason converted to narrow Italy’s lead to 10-7. The score would remain as the two teams went into the sheds at half-time.

Mason slotted a penalty to start the second-half, levelling the score at 10-all.

Some brilliant lead up work from Liam McNamara and Jack Maddocks saw Liam Jurd cross for the team’s third try in the 63rd minute. Mason continued his success with the boot, slotting his fourth kick for the afternoon to put Australia ahead 24-10.

The reserves continued to deliver for the Australians, with Western Force prop Sham Vui scoring the bench’s third and Australia’s fourth try, with a barnstorming 40-metre effort.

Mason closed out the game with a try of his own in the final play of the game, linking with McNamara down the right hand side. He converted his own try to take the final score to 38-10.

Mason was named man of the match and finished the 80 minutes having scored 18 individual points.

Australia will now prepare for their third and final pool game against England on Wednesday.

“We’ve got another hard task ahead of us against England on Wednesday and the team will need to continue to improve and raise the bar if we are going to be ready for that match,” said Thompson.