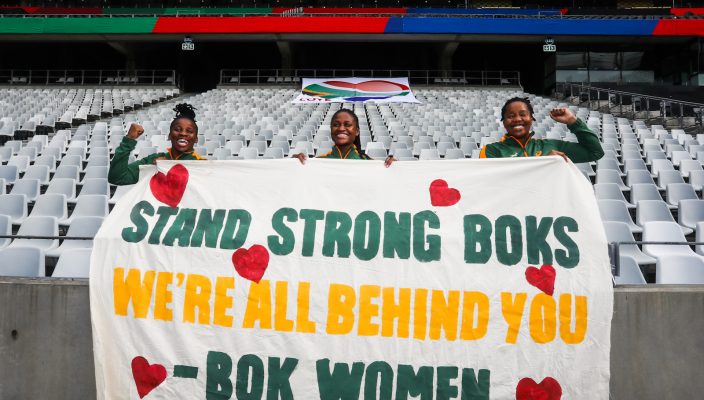 Springbok Women’s players Zintle Mpupha, Lusanda Dumke and Chumisa Qawe joined rugby fans across the country in backing the Boks by creating a personalised banner in the build up to the crucial second Test between Siya Kolisi’s charges and the British & Irish Lions in Cape Town on Saturday.

The banner will be on display at the Cape Town Stadium with a number of others from die-hard Springbok fans who have expressed their support for the team in this unique manner as fans continue to turn their homes into their own stadiums as part of the #SpringbokSaturday campaign.

As part of the initiative Springbok fans receive the chance to have their voices heard through a fan banner campaign being run on SA Rugby’s digital platforms, with Bok supporters being encouraged to send through poster messages, slogans or colloquial encouragement. The funniest, most inspirational, and motivational messages are displayed at Cape Town Stadium on match days.

“As Springbok Women we understand the significance of wearing the green and gold jersey,” said Dumke.

“We are delighted to have this opportunity to show our support for the Springboks by creating our own personalised message of encouragement that will be on display at the Cape Town Stadium when they line up against the British & Irish Lions in Saturday’s crucial match.

“We wish coach Jacques Nienaber, captain Siya Kolisi and the entire Springbok team the best for the match, and we’ll be backing them along with the rest of the nation all the way when they take the field.”

All three Springbok Women’s players recently participated in the Women’s Premier Division competition which concluded earlier this month, when the Border Ladies created the upset of the season to dethrone DHL Western Province for the title.

Just as the next few weeks mark an important time for the Springboks – who will face the British & Irish Lions in the last two Tests of the historic series before kicking off their Castle Lager Rugby Championship campaign with back-to-back Tests against Argentina in Nelson Mandela Bay on Saturday, 14 and 21 August respectively – the Springbok Women have a big job on their hands as well.

Springbok Women’s coach Stanley Raubenheimer named a training squad of 35 players for a two-week national training squad in Stellenbosch from 6 to 20 August, as they continue their preparations for the Rugby World Cup that will be hosted in New Zealand next year.