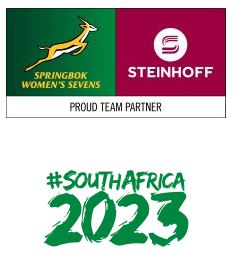 Rights Mkhari and Zinhle Ndawonde will face a baptism of fire in the Rugby Africa Sevens in Tunisia on Saturday and Sunday as they make their Springbok Women’s Sevens debuts in the tournament that doubles up as the Rugby World Cup Sevens Qualifier.

Springbok Women’s Sevens coach Renfred Dazel on Monday made three personnel changes to the team that participated in the World Rugby Women’s Sevens Series Qualifier in Hong Kong in April.

Mkhari and Ndawonde, who have been training with the team since late last year, have earned call-ups to the team along with Eloise Webb, who made her debut in the Dubai Women’s Sevens Series in December. They replace Marithy Pienaar, Nomsa Mokwai and Phumeza Gadu in the squad.

Pienaar and Mokwai, who recently returned from injury layoffs, both participated in the Hokkaido Invitational Sevens in Japan this past weekend as members of the SA Select Women’s Sevens team.

“Rights and Zinhle have made good strides in their fitness and skills levels since training with the squad late last year, so their selection is just reward for all the hard work they have put in,” said Dazel.

“This is a big tournament for them as individuals and for the team as a whole as we have a good track record in the Rugby Africa Sevens, but we are also playing for a place in the Rugby World Cup Sevens.

“Zinhle and Rights will be surrounded by experienced campaigners and will have the luxury of playing in a settled side, so they will have sufficient guidance on the field.”

Dazel expected a challenging task in Tunisia, but he said his charges knew what they had to do to be victorious, and in turn, book their place in the World Cup.

“This is our first tournament since the Women’s World Series Qualifier in April, but we have been working hard to improve all the facets of our game to give us the best possible chance to win this tournament,” said Dazel.

“We have no doubt that we will be tested thoroughly, especially by the likes of Kenya and hosts Tunisia, but if we stick to our structures and use our point-scoring chances, we have what it takes to emerge victorious and defend our title.”

The Springbok Women’s Sevens, who will depart for Tunisia on Wednesday, will face Morocco, hosts Tunisia and Uganda in the pool stages on Saturday.