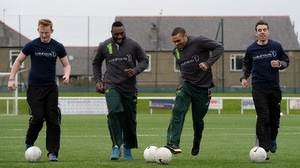 Boks put their soccer skills to the test in Edinburgh

A formidable group of Springboks took time out from their busy schedule preparing to face Scotland at Murrayfield on Sunday to challenge a rather less imposing team comprised of Edinburgh youngsters to a penalty shootout – but this time it all happened on a football pitch.
Laureus Ambassador and rugby legend Bryan Habana, accompanied by Springboks captain Jean de Villiers and squad members Tendai ‘The Beast’ Mtawarira, Scarra Ntubeni and Frans Malherbe, visited the Laureus-supported Street League project in Edinburgh today to meet the young people there and decided to take them on at their own game.

Football, rather than rugby, is the sport used by the Street League Academy programme, so the Springboks, never known for shirking a challenge, got out their shooting boots. They went on to lose 3-2.

Bryan Habana, one of the greatest players in history, who scored eight tries in South Africa’s 2007 Rugby World Cup victory, said: “It has been great fun meeting the kids. Maybe next time we will take them on at kicking penalties between the posts with a rugby ball rather than soccer goals.”

Street League, with the support of the Laureus Sport for Good Foundation, looks to help young unemployed people and offers an eight-week programme to improve the employability skills of those who take part. For every five graduates from the Academy, two get jobs and two move into education and training.

Habana added: “I think the various ways that Laureus helps sportsmen like myself to give something back to young people like this is wonderful. I think the work that Laureus does around the world, and particularly in my native South Africa, is just great and I am delighted to be here, as a proud Laureus Ambassador with my Springbok team-mates in Edinburgh today to do what I can to support Laureus in another country and help to inspire these young people to do even better.”

During their visit to the Street League project at The Spartans Community Football Academy in Ainslie Park, the Springbok players joined classroom sessions and took part in warm-up drills and a football match, before the highlight of the day: the penalty shootout which all the youngsters will remember for a very long time.

Springboks captain Jean de Villiers, whose team beat Wales by 24-15 at the Millennium Stadium in Cardiff last week, said: “All the Springbok players here today were so impressed with what we saw. We all know what a great role sport can play in helping young people. This Laureus-supported Street League project is a perfect example of how you can give hope and opportunities to young people. We were all very impressed to see such a high success rate, with three out of every four graduates going on to a more positive future. We wish everyone at Laureus and Street League well, especially the young guys that we met.”

Laureus World Sports Academy Member and renowned All Blacks captain Sean Fitzpatrick said: “On behalf of Laureus I would like to thank the South African players for visiting the project in Edinburgh, despite being in the middle of a busy international schedule. I would also like to thank them for their wider commitment to Laureus. This is one of several Laureus projects that they have visited over the last few years and I look forward to that relationship continuing. I know they will have enjoyed at first hand seeing this wonderful project in action, where sport is playing such an important part in giving so many young people a helping hand in the early years of their lives.”

One of the young people from Street League who took part in today events was Ryan, aged 17. He said: “When Adam, my course leader, told us that the South African rugby union team were coming to the Academy to meet us and take part in football sessions, I was really excited. I had never met any famous people before.

“I really enjoyed chatting with Jean de Villiers about being a captain – as I am captain of my football team and we are learning about being a leader on the Academy. Jean gave me some tips about becoming a stronger leader and becoming more confident, which I am going to use when looking for a job. It was a great day, one I will always remember.”