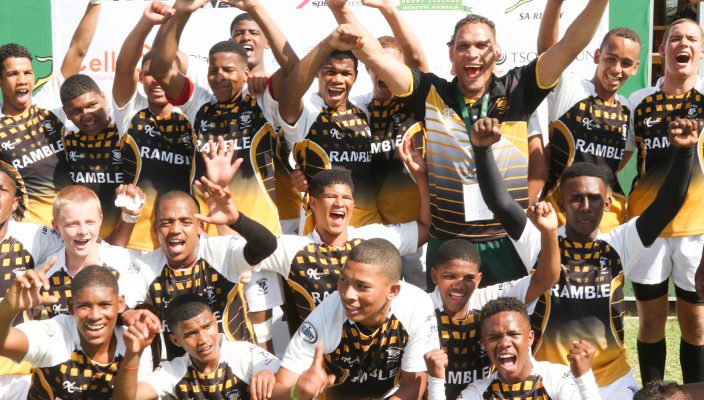 It was a rewarding day for Boland on the final day of the Iqhawe Week at Paarl Gymnasium on Thursday, as they delivered a scintillating performance against Griquas in the final match of the tournament for a 29-10 victory and top honours in front of their home fans.

The Bolanders got off to a flying start in the grand finale of the Under-15 competition – which is a joint venture between the South African Rugby Legends Association and SA Rugby – scoring four tries before the break, which included two by Michail Damon (fullback), to race to a 26-5 halftime lead.

This paved the way for their convincing 29-10 victory, despite the only points scored in the second half being a penalty goal by Boland and try by Griquas. The win marked their third in as many games – a feat only Boland and the Sharks achieved in the tournament.

The Sharks, in turn, overcame a tightly-fought first half against Eastern Province in which they led 12-10 to force their way to a 26-15 victory, while the Leopards also ensured that they finished the competition strongly with six different players crossing the tryline en route to their 43-5 victory against the Pumas.

The Golden Lions, meanwhile, scored four tries to three by SWD for their 31-17 victory, with their more effective goal-kicking handing them a distinct edge on the score board.

There were also a number of tight contests spicing up the final day’s action, with the Griffons and Valke playing to a 17-17 draw as they scored three tries and one conversion a piece, while Border pipped Western Province 32-31 after surviving a strong second-half fightback by the Capetonians who found themselves trailing 20-5 at the break.

Free State had to work hard for their 21-19 victory against the Blue Bulls, with their extra conversion proving to be the difference on the scoreboard as both teams touched down three times.