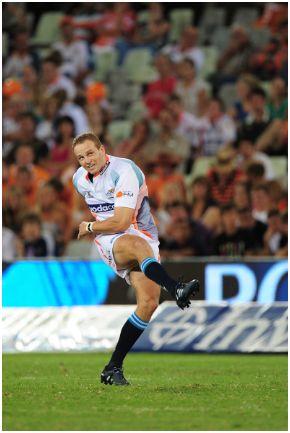 Meyer Bosman and Naas Olivier kicked the Cheetahs to a 28-12 victory against the Wellington Hurricanes in the Super 14 on Saturday.

The South Africans, despite playing at home, had been underdogs against a Wellington team unbeaten in their opening three matches.

The New Zealanders looked more threatening in the opening exchanges but could only score a single try, in the 10th minute by wing David Smith, as scrumhalf Piri Weepu missed three kicks at goal.

A resilient Cheetahs defence kept the opposition out and slowly turned the momentum their way.

The Hurricanes were also hampered by a yellow card to centre Ma’a Nonu.

The Cheetahs seized control when a 49th-minute try by replacement loose forward Kabamba Floors, converted by Olivier, earned a 19-5 lead.

Fullback Hennie Daniller gathered a loose ball, evaded two tacklers and passed to wing Jongi Nokwe whose chip kick was grabbed by Floors and he fought his way through two more tacklers.

Bosman, with another long-range effort, and Olivier then booted two more penalties to stretch the lead to 25-5 and leave the Hurricanes staring at their first defeat of the season.

Flanker Jeremy Thrush was yellow-carded for infringing in a ruck in the 67th minute but fullback Cory Jane dived over for Wellington in the 71st minute, replacement flyhalf Willie Ripia converting.

Olivier, though, made sure of victory with another penalty. – Reuters