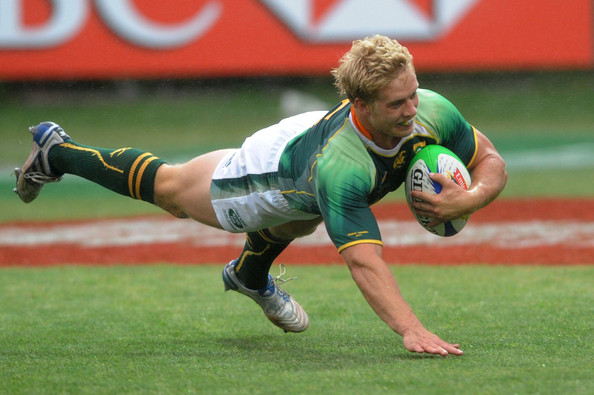 Kyle Brown, the second most-capped Springbok Sevens player of all time, will lead an exciting Blitzbok squad to Singapore this weekend for the eighth tournament of the HSBC World Rugby Sevens Series.

Brown will play for South Africa in his 65th tournament, just three shy of Frankie Horne’s record of 68, but performance rather than experience will be the key factor for the Blitzboks to maintain their lead in the World Series.

Powell was happy to inject some youth into the squad: “One of our objectives this season was to expand the depth of our playing squad and because of that I was not forced into any selections due to injuries. This squad is our best one for this tournament as everyone is really pushing for a starting position.”

Joining them on the flight to Singapore will be Brown and six other Team SA members from the recent Commonwealth Games in Gold Coast, Australia, where the team placed fourth – Dylan Sage, Werner Kok, Rosko Specman, Cecil Afrika, Siviwe Soyizwapi and Zain Davids, the only player who played in both tournaments.

Oosthuizen pulled out of the Gold Coast event due to injury with Selvyn Davids joining Team SA as reserve, but he did not get any game time.

Specman makes a return to the HSBC World Rugby Sevens Series after he missed the North American leg, while Brown will captain the side for the second time this year, having done so in Hamilton, New Zealand too.

He again takes over from Philip Snyman, with the regular captain along with some senior players been given a rest after a heavy workload during the season. .

At the other end of his career as Brown, Bezuidenhout will add a second tournament cap to his name after his debut in Hong Kong at the beginning of the month.

“It was tough to name this squad, due to the short turnaround,” said Powell.

“We are also looking ahead at the final two tournaments of the series in London and Paris, as well as the Rugby Sevens World Cup in July, so the squad was picked with that in mind. We are going to Singapore to perform according to the standards we have set as a Springbok Sevens team.”

The Blitzboks play Samoa, Canada and Argentina in Pool C of the tournament, on the opening day, Saturday, 28 April.

The Springbok Sevens team for the HSBC Singapore Sevens (with tournament caps and points) is: