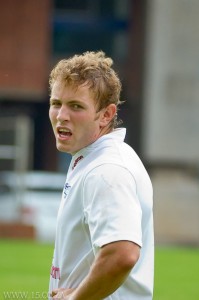 Exciting midfielder Johann Sadie will make his debut for the Vodacom Bulls on Saturday after being named in the side that will play the Cheetahs in a friendly match in the Peter Mokaba Stadium in Polokwane.

The 22 year old has joined the Vodacom Bulls from the Stormers and Western Province late last year and has been working hard during pre-season with his new team. He now gets a chance to show his worth to Ludeke, who named a starting team consisting of 11 Springboks.

World Cup attendees Morné Steyn, Francois Hougaard and Chiliboy Ralepelle will all be in action for the first time since the Springboks quarterfinal exit from the World Cup.

Francois Venter and CJ Stander is the only players in the starting line-up without any Super Rugby experience.

“We are keen to see where we are at this stage of the season. The Cheetahs have had some game under the belt and will be a difficult opponent, just what we need now,” Ludeke said.

Ralepelle will captain the Vodacom Bulls, with Pierre Spies (calf) and vice captain Wynand Olivier (wrist) absent due to injury. Jacques Potgieter (back) was not considered.

The Vodacom Bulls team to play the Cheetahs in Polokwane is:

●Tickets for the match will be available at the Peter Mokaba Stadium in Polokwane till Friday. It can also be purchased through Computicket.