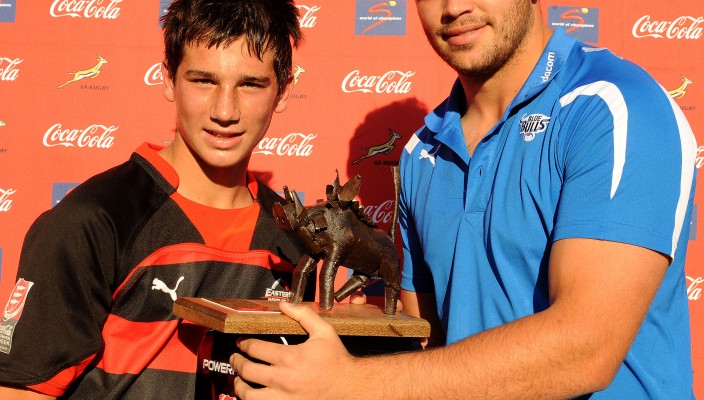 Bulls Players Supporting The Players at Coca-Cola u13 Craven Week 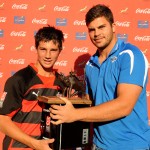 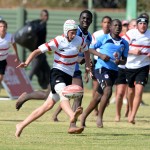 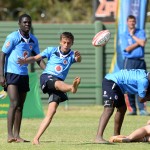 27 June 2013.  Blue Bulls Super rugby players, Dewald Potgieter, Dean Greyling, Jono Ross, and their coach, Frans Ludeke, spent the day in Bela-Bela on Thursday at the Coca-Cola under-13 Craven Week, supporting the Blue Bulls team, and generally showing their interest in rugby at this level.

Eighthman, Jono Ross, who is included in the Bulls match 23 for the first time on Saturday, said he is very impressed with the whole affair.

“It was a great day out for us,” he said. “It’s nice to mix with ordinary rugby people, the atmosphere was amazing, and there was some pretty good rugby on display,” he said.

Ross never played rugby at primary school himself, and he believes these players are getting an excellent grounding ahead of their future playing careers. “I’m amazed at how seriously they all take it, even at this age. Maybe they should be having more fun in the process, but then, again, this is a showcase for them to show their talents, and I am sure that many of them will be going on to top rugby schools as a result of them appearing here

“That will be good for their rugby and it can change their whole lives.”

The standard of play also impressed Ross. “I saw some players here who can really play,” he said. “And the teams are playing according to game plans that are more advanced than what you’d expect from players so young.

“All in all, it was a very enjoyable day and a good way to break the tension of preparing for Saturday’s big Super Rugby game.”

The Blue Bulls under-13 team responded to their famous supporters by trouncing the Golden Lions 24-0 and booking their spot in the main game of the Coca-Cola under-13 Craven Week which end on Friday.