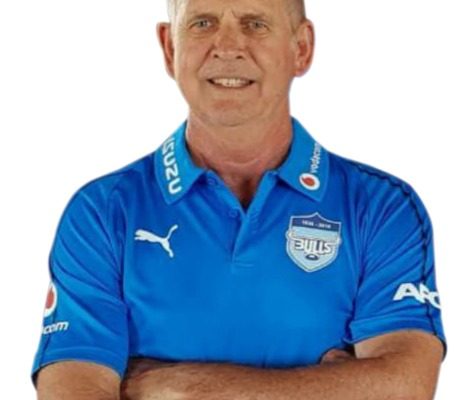 The #BullsFamily have bid farewell to Alan Zondagh, director of Rugby at the end of January. He has stepped down due to personal reasons and to enjoy more quality time with the family. His current role will not be immediately filled. The responsibilities of the role will be shared between head coach Pote Human and CEO Alfons Meyer.

Zondagh was appointed at the BBCo in January 2019, with the core vision of restructuring the High-Performance department at the BBCo. He has been a true servant of the game on a global stage dedicating the last 40 years of his life to this beautiful game.

Starting in the early 80’s as director of coaching for the Western Province Rugby Union, he moved on to head coach of Eastern Province and then returned to the WP as head coach in the 90s. He later travelled abroad coaching the London Scottish, before assuming the role of Director of Rugby at Saracens between 1999 and 2000. He thereafter became the performance director at the Rugby Performance Center between 2005 and 2017. Zondagh then pursued his own consultancy for the next few years before accepting his role at Loftus.

Even though he will still be involved in assisting with rugby projects at the BBCo, he is looking forward to stepping back and taking some time to enjoy with his family.

“My time in rugby wasn’t about a career or job,” Zondagh stated, “it was truly a way of life for me. Once the #BullsFamily gets into your blood, you can never leave it behind, so as much as I look forward to enjoying a bit of relaxation, I’m also keen to get stuck into a few projects assisting the team.”
Alfons Meyer, CEO of the BBCo, heaped praise for Zondagh’s achievements at Loftus, “Alan is a true gentleman of the game, and we were privileged to have a man of his abilities to be part of our system. He has played a massive role in the stabilization of the organization and for that we are eternally grateful. We wish him all the best with the part that lies ahead.”