Butch James back in 10 Jersey for Bath 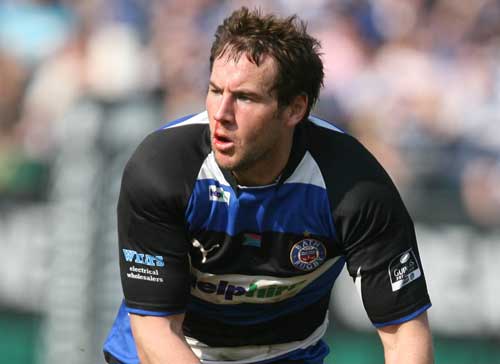 Having made an excellent recovery from an ACL injury sustained last season, Butch James will finally be able to pull back on his number 10 jersey when he faces Sale Sharks on Saturday.”It is so good to be back,” admitted Butch earlier this week. “It has been a long nine months, but to actually be at the finishing line now and preparing to get back on the field with the rest of the guys is great.”

Enduring such a long lay off and being forced to watch from the sidelines must have been endlessly frustrating for the 31-year-old.

“It is the worst thing ever,” said James. “You get more nervous before a game than you would if you were playing in it.

“When you can’t help the guys on the field you do end up getting so frustrated – so to actually get out there this weekend and be able to hopefully help the guys out will be great.”

Since joining Bath Rugby in 2007, shortly after winning the Rugby World Cup with the South African team, Butch has made quite the impact. Making 44 appearances in Bath colours, the fly-half has scored 325 points for the club since landing on English soil. But, even with his shining record, James is still feeling nervous ahead of the game.

“When you think about getting back into taking big hits and dishing them out, it can make you cringe a bit. But when you get out onto the field, you are in the heat of the moment and you soon just enjoy playing the game.

“I am a bit nervous, but once we kick off I will be looking to get stuck in straight away.”

Having enjoyed (or endured) three winters in Bath, Butch has had some pretty extreme weather to contend with – especially when he returned from a holiday back home to discover a snow-covered Rec.

“I have never seen snowfall like that before, so that was quite nice to see.

“But, I was lucky. The coaches and physio’s gave me some time off over Christmas and it is always good to go back home and get a bit of sun. I came back feeling nice and fresh.”