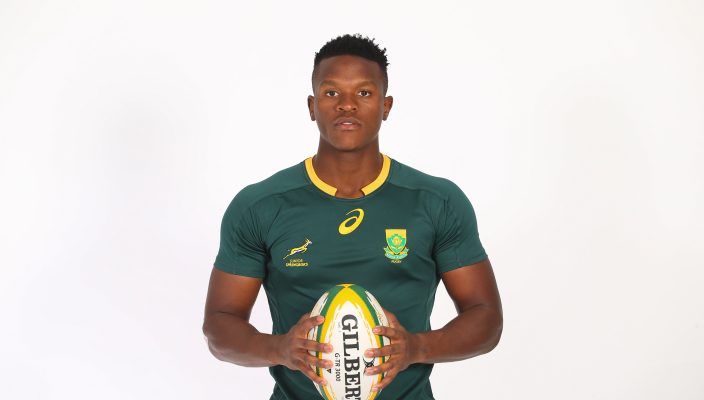 It is exactly a week since Phendulani Buthelezi was named as the Junior Springboks’ captain for 2019, and the Cell C Sharks looseforward says it is such a surreal feeling, it still hasn’t sunk in yet.

Buthelezi, who turns 20 years old on Thursday, 30 May – the day after the Junior Springboks depart for World Rugby U20 Championship in Argentina – initially missed out on selection for the SA U20 squad that travelled to the south of France last year, before called up as injury replacement. But this year, he will have honour of leading the side.

“I always knew that I had to step up into a senior role this year, but I really cannot say I expected to be named the captain,” said Buthelezi.

“It is amazing to represent your country at any level, but to captain a team makes it even more special. To be honest, it still hasn’t sunk in yet.

“That said, I am honoured to lead this team, and I understand the magnitude of this responsibility. I am really looking forward to this experience.”

Buthelezi may be new in the Junior Springbok captaincy role, but he has had ample experience as a team captain in recent years, having led the Durban High School First XV team, the Sharks U17 Sevens team, his SA Rugby U18 Craven Week team and more recently the triumphant Cell C Sharks SA Rugby U19 Championship team in 2018.

“The experience of leading a few teams before has been invaluable in shaping how I interact with my team-mates on and off the field thanks to the different challenges and players I have had to work with in the past,” said the talented flanker.

“It taught me the importance of getting to know each player as well as possible on and off the field, so that you know what brings the best out of them.”

Buthelezi has fond memories about how he took up rugby following in the footsteps of his three older brothers.

“I am the youngest of five children – I have three older brothers and a sister – and I remember watching my brothers playing rugby in the garden, and I naturally wanted to play too,” said Buthelezi.

“One of my brothers in particular, Blessing, taught me a lot about the game because he is only three years older than I am, so we went to school together and had a lot in common.”

Being named the Junior Springbok captain is one a few highlights in Buthelezi’s rugby career up to now. The others were receiving his first Vodacom Super Rugby cap from Springbok and Cell C Sharks stalwart Tendai Mtawarira, being a member of the Cell C Sharks SA Rugby U19 Championship squad in 2018 that won the title after advancing through the competition unbeaten and DHS’ 20-17 victory against Glenwood High in his Matric year, which was the first time he had tasted victory against them.

However, Buthelezi has faced challenges along the way and one of them was missing the cut for the initial 2018 Junior Springbok squad for the World Rugby U20 Championship.

“Being excluded from the initial 28-man squad in 2018 and then being called up to the tournament as an injury replacement taught me a number of lessons,” he said.

“It was a huge disappointment at first, but the lessons I took from that was that one cannot control everything, and that everything happens as it should. It also showed me that if you keep believing and work hard, you can achieve your goals.

“Despite being called up late, it was a huge privilege to go to the World Rugby U20 Championship last year, and being in this position this year is something I will always cherish.”

Coming from a close-knit family, it was no surprise that the first person he called after being named the captain was his mother.

“I always call my mom first when there is big news, so she was the first person I called when I found out I was in the Junior Springbok squad and about the captaincy,” he said.

“And it was quite emotional because she cried on the phone. My siblings were equally delighted about the news, so I really hope I can make them and the country proud.”

Being a man of the moment, Buthelezi – whose role models are Springbok No 8 Duane Vermeulen and Kieran Reid of New Zealand – opted to look at the near future when talking about his career goals and said: “My main goal now is for the Junior Springboks to win the World Rugby U20 Championship, and then I would like to work my way into a position to be a regular member of the Cell C Sharks Currie Cup team and hopefully the Vodacom Super Rugby side next year. I know this is going to take a lot of hard work, but I am looking forward to it.”

The World Rugby U20 Championship will be hosted in Argentina from 4 to 22 June. The Junior Boks will meet Scotland on Tuesday, 4 June, before taking on Georgia (Saturday, 8 June) and New Zealand (Wednesday, 12 June) in the pool stages in Rosario. The semi-finals will be contested on Monday, 17 June, and the final on Saturday, 22 June.