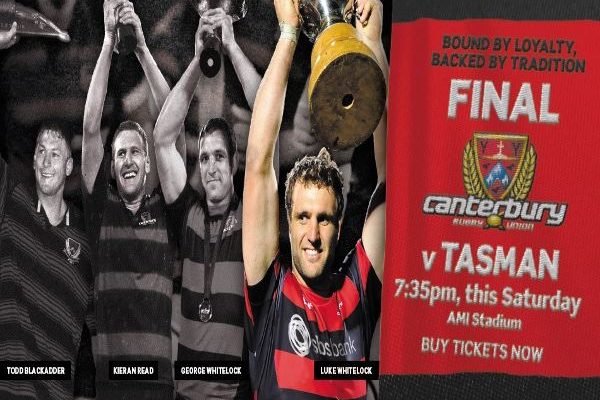 Canterbury are aiming for their eighth national provincial title in nine years when they take on Tasman this Saturday night.  The 2016 Mitre 10 Cup Premiership Final is the culmination of 11 weeks of competition between New Zealand’s best provincial teams.  Canterbury earned the right to host the final at AMI Stadium by qualifying top of the table at the end of pool play and then beating Counties Manukau in their Semi Final last weekend.

Canterbury Head Coach, in his last game in charge of the side before he moves onto the Crusaders Head Coach role, said he was immensely proud of the team for putting themselves in the best possible position at this end of the competition.

“I could not be more proud of this 2016 Canterbury team and all that they have achieved. Nine wins from 11 games so far, a top of the table placing, the Ranfurly Shield, and just one last prize to try and claim on Saturday night. This challenge will be our biggest one yet, but I know that this team has the talent and the heart to face it,” Robertson said.

Robertson has made four changes to the team that beat Counties Manukau last weekend.  In the forwards, props Daniel Lienert-Brown and Alex Hodgman have rotated so that Lienert-Brown starts in the 1 jersey this week.  David McDuling replaces the All Blacks-bound Scott Barrett at lock, while Jed Brown comes onto the bench.

Rob Thompson has recovered from his knee injury to return at second five, while Jordie Barrett moves to centre.  Jack Goodhue will miss the final with a hamstring injury.

Johnny McNicholl, at fullback, will play not only his last game in red and black before heading to the Scarlets Club in Wales, but his 100th game in red and black.  It will be his 60th match for Canterbury, to add to his 40 Crusaders caps.  Robertson said that this will add some emotion to what is already a special night for the team: “Nobody needs any extra motivation when it comes to finals footy, but there is no doubt that all of Johnny’s teammates will be determined to send their good mate out on a high note on Saturday night.”

This week the team has been named by Halswell School’s Kapa Haka group who are part of our Adopt-a-School programme and will be performing before the game on Saturday night. The team naming can be viewed here or read the listed team on our website here.