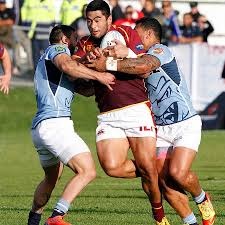 Cardiff to the Hurricanes for 2014

Southland midfielder Cardiff Vaega has claimed the final spot in the Hurricanes squad for 2014.
Vaega signed with the franchise this week, after Wellington Lions lock Mark Reddish also recommitted to the team for 2014.
The two signings round off the Hurricanes’ roster for next season, with its wider training group members still to be added.
At 22 years old, Vaega has been a standout for Southland during the ITM Cup, particularly through his midfield pairing with Willis Halaholo.
Hurricanes’ coaches Mark Hammett and Alama Ieremia felt Vaega had been at the forefront of that pairing, and would be a good fit for the Hurricanes in 2014.
Assistant and backs coach, Ieremia, said Vaega was physical, made accurate defensive decisions, and had been one of the standout midfielders during the 2013 ITM Cup.
“Cardiff offers the size and physical presence we were looking for in our midfield. He’s been a consistent performer for the Southland team and we’re excited to help him develop his game through the Hurricanes environment.
“As a team man, he will fit well into our culture and we welcome him to the next challenge of his career.”
Vaega said he couldn’t be more excited to pick up the last spot in the Hurricanes squad, and put his selection down to the confidence he had developed at Southland Rugby.
“I’ve got a bit more confidence this year which has enabled me to express myself better on the field and show people what I have to offer.
“I grew up watching and admiring a number of players in the Hurricanes and can’t wait to have a chance to pull the jersey on myself. I’m looking forward to representing the team as best I can on and off the field.”
Vaega is the son of former Manu Samoa international To’o Vaega, who played a starring role in Samoa’s 16-13 upset win over Wales at Cardiff Arms Park during the 1991 World Cup.
Born in 1991, Vaega takes his christian name from that very occasion.
A former Kelston Boys’ High School student, he moved to Invercargill in 2011 to join the Rugby Southland Academy and study at the Southern Institute of Technology.