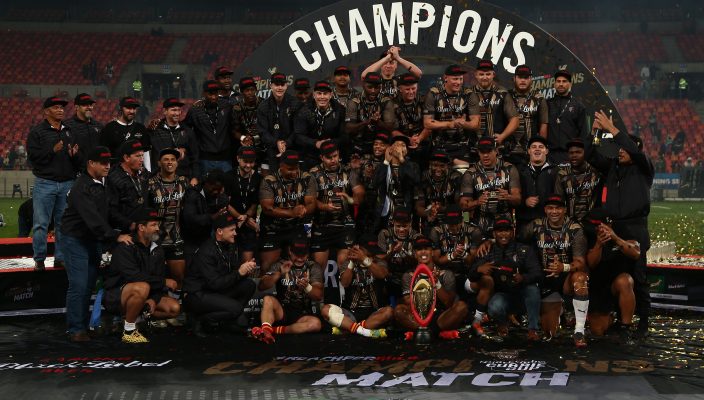 Having seen off the Kenyan national team last year 85-17–in the inaugural Carling Champions Match. The Carling Champion Team were presented a challenge against the Azzurri-Italy A, securing a hard-fought 31-27 win in what turned out to be a thriller at the Nelson Mandela Bay Stadium. The atmosphere inside the stadium was filled with the sounds of fans singing Igwijo spurring the team on.

Going into the match, Carling Black Label put the spectacle together with partners SA Rugby, the Nelson Mandela Bay Stadium and the City of Gqeberha – and emphasised that the occasion was about giving a platform for the stars of the Carling Currie Cup to showcase their talent.

“We’d like to provide up and coming players with a platform and an opportunity to showcase their skills in their journey to greatness,” Carling Black Label Director ArnÃ© Rust had told the media. “It’s no coincidence that we’re calling this team the black and gold, we’re thinking of it as the stepping stone to the green and gold.”
Jimmy Stonehouse, who was voted the Carling Champion Team coach after guiding the Airlink Pumas to their first ever Carling Currie Cup title, agreed with Rust’s idea that the Carling Champions Match is a new pathway to the top.

“If you look at this team – if you look at this man here [team captain and player of the match Simphiwe Matanzima, who’s playing great rugby at the moment – there’s a lot of talent in that team, even with a 23-year-old lock like [the Vodacom Bulls] Janko Swanepoel,” said Stonehouse.
“There are many people that don’t get opportunities, by getting the fans involved suddenly those guys get opportunities, exposure and bring something new to the playing field. That’s what’s great about this competition, it can snowball…”

Looking at the match in Gqeberha, few things suggest green and gold-bound more than a hard-fought victory over a team that is Italy’s next in line.
Having voted for weeks through USSD, Facebook Messenger and the Carling Currie Cup website and amassing over a million votes, the fans had spoken with a 23-man match day squad comprising of seven players from the Toyota Cheetahs, six Vodacom Bulls representatives, four players each from DHL Western Province and the Airlink Pumas, with flank Sibusiso Sangweni the Lions’ lone representative and Cell C Sharks hooker Dan Jooste rounding off the bench.

Fans tuning into the match on TV and radio meant they got to experience their selection handiwork live- and they weren’t disappointed with a performance in which the Carling Champion Team scored five tries to win.

Vodacom Bulls scrumhalf Keagan Johannes’ 46th minute try vindicated why the players across the Carling Currie Cup received one million votes in the build-up to the game.
Prop Matanzima was happy to have been the voted-in captain when the Carling Champion Team preserve its winning record: “I’m glad we’ve got a 100% record. It’s nice to know you’re supported and have the backing of your people, especially as I’m an Eastern Cape boy from eKomani.”

Stonehouse was in the rare position of not only coaching players he’d just finished coaching against, but he also celebrated two back-to-back wins in successive weekends.
“I’ve learnt a lot about these guys in the last few days, it’s amazing to see how much they’ve grown from meeting them on the first day to now. People won’t understand that but that’s how you really get to know people.”

“Victor Sekekete and Nama Xaba are amazing men. Keagan, who spent a week with us at our union, has already made it in life and is playing brilliant rugby with the Bulls, I don’t know where a guy like that is going to end up.”