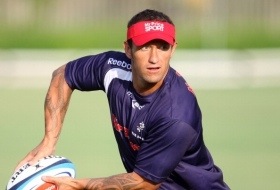 Crous said Spencer, who played for the Blues and for New Zealand internationally, was well known for his flamboyant, attacking play and ball handling skills and brought with him a wealth of experience.

“Carlos will be joining the EP Kings to focus on the back line as well as skills training,” said Crous.

Spencer first rose to prominence when he starred alongside Christian Cullen in a Ranfurly Shield challenge in 1991, playing for the Horowhenua team against Auckland. Auckland coach Graham Henry spotted Spencer’s talent and recruited him to play for the Auckland team.

He played for the Blues Super 12 team from the inception of the competition in 1996 until 2005, and also played extensively for the Auckland NPC side. In 2005 he signed to the English club, Northampton Saints.

In 2010 Spencer signed for the Johannesburg-based Golden Lions, to play for the team in the 2010 and 2011 Super Rugby seasons. He subsequently took up a coaching role with the team before moving to the Durban-based Sharks for the 2013 season.

Crous said as a player, Spencer was valued for his imaginative kicking and passing game, and his ability to unlock defences.

“We are excited to see what Carlos can do with our team and are sure that he will be a positive asset to the team coaching structures,” he said.