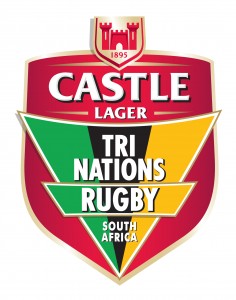 The South African Rugby Union (SARU) on Wednesday unveiled Castle Lager as the new title sponsor of the Tri-Nations series, as well as of home Springbok Tests and overseas tours. The tournament will now be known as the Castle Tri-Nations series.

The announcement was made at the SAB World of Beer in Johannesburg, with Mr Oregan Hoskins, President of SARU, welcoming the return of an old friend to rugby’s front-line sponsorship family.

“Castle Lager and SAB Miller are old friends and it’s with great pleasure that we welcome them as naming rights sponsor of the Castle Tri-Nations Series and in their continuance as an associate Springbok sponsor,” said Mr Hoskins.

“The tournament is simply the toughest in world rugby and enjoys a global profile and international regard as being at rugby’s cutting edge. SAB Miller is a cutting edge company and once again it’s very satisfying to have Castle Lager as so visible a part of the rugby family.”

Castle Lager started its involvement with the Springboks in 1997 after taking over from another SAB giant, Lion Lager. The strategic move allowed Castle Lager to add rugby to its existing soccer and cricket sponsorships. Today, it is the only sponsor that supports all three of South Africa’s largest national sporting codes.

“Castle Lager and the Springboks are an integral part of the fabric of South African society,” said Mr Norman Adami, Chairman and Managing Director of SAB Ltd at the launch. “The further coming together of these two brands today is very special and the partnership forged will be significant for South African sport – both now and in the future.

“This sponsorship of the Springboks represents a renewed and passionate commitment by us to invest more significantly in rugby as a unifying pillar of our country and demonstrates our ambition to represent, harness and support the best that South Africa has to offer.”

The Castle Tri-Nations kicks off on Saturday July 23 when the Springboks take on Australia in Sydney (kick-off 12h00 SA time). A week later the Boks meet New Zealand in Wellington (09h30 SA time) before hosting the teams in Durban (Australia) on August 13 and Port Elizabeth (New Zealand) on August 20.