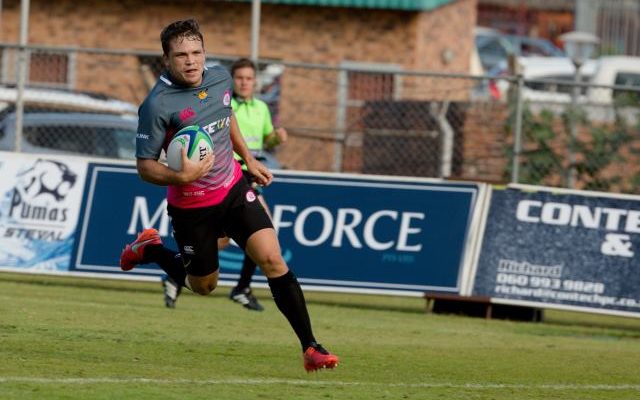 On a lovely Lowveld autumn afternoon, the Steval Pumas welcomed the Xerox Golden Lions to the picturesque Kanyamazane Stadium for the second round of the SuperSport Rugby Challenge.

The Steval Pumas started on the front foot, forcing a 2nd-minute penalty, slotted by Kobus Marais, 3-0. Following a lengthy break for medical attention to a Lions player, Arthur Bobby, and the subsequent substitution, the Xerox Golden Lions struck back with a trademark, converted, ball-in-hand try, 3-7.

Kobus Marais laced up his kicking boots again today and kicked two more penalties to take the score to 9-7.

The end-to-end action eventually leads to a converted Xerox Golden Lions try in the 29th minute, 9-14.
Marais hit back with another penalty 4 minutes later, 12-14, before the Steval Pumas scored a converted ball-in-hand try of their own. Reynier van Rooyen and Kobus Marais combining for 19-14. The Xerox Golden Lions kicked a 38-minute penalty for a half-time score of 19-17.

In the final minutes of the game, the Steval Pumas launched repeated attacks, but resolute defence and a 78-minute turnover penalty would see the Xerox Golden Lions run out 40-29 winners.

Steval Pumas coach Brent Janse van Rensburg said they were still in the game right up until the end.

“On one or two occasions, we ran the ball out of our own 22, forced play and lost possession, which put us under pressure. We did some really good things on defence. We also looked good at times with the ball in hand and created opportunities that we just didn’t capitalise on. Ultimately, I think there were a few soft moments which cost us. We were still in the game right up until the end. The guys will learn some lessons out of this, hopefully, bank this and grow from it,” said Janse van Rensburg.

He said the team didn’t link well enough on their kick chase, leaving a gaping hole for the Lions to run through resulting in a try and two soft 1 on 1 moments at scrum defence where the Pumas were numbered up ended up being costly.

“Unfortunately, we lost some vital set piece ball. Losing critical lineouts in good attacking positions and conceding some scrum penalties deprived us opportunities to launch an attack. Defensively we did better in the collision compared to last week and stopped their momentum well. We kept them out for extended periods, but unfortunately, those isolated soft moments resulted in us giving away easy points and having to play catch up. We will need to defend a bit less in games to come and protect our possession.” said Janse van Rensburg.