THE Pool draw for the Cell C Community Cup was confirmed on Monday after Durbanville-Bellville of Western Province became the 20th and final team to qualify for the 2015 edition of SARU’s flagship national tournament for non-university clubs, which kicks off in 100 days’ time.

Durbell’s 82-26 victory over Upington Dorp in the Northern Cape town on Saturday brought the curtain down on two months of regional qualifying across the country, to determine the five so-called ‘wild card’ teams to join the 15 automatic qualifiers in the third Community Cup.

South-East qualifiers and newcomers Port Elizabeth Police, together with Repechage winners Durbell, have been drawn in Pool A alongside defending champions Rustenburg Impala, Kempston Old Sebornians of Border, and fellow debutants Springs (Valke).

Central qualifiers Jonsson College Rovers, the 2010 and 2012 old national club champions and 2013 Community Cup runners-up, find themselves in Pool B alongside, amongst others, Gauteng heavyweights Raiders (Golden Lions) and Pretoria Police (Blue Bulls).

North qualifiers Vaseline Wanderers, established in 1888, are drawn in Pool C alongside 2014 Community Cup bronze medallists and South Africa’s oldest club, Hamiltons, as well as two sides who return after a year’s absence – Villagers Worcester of Boland and SWD’s Evergreens, who finished eighth in the inaugural tournament last year.

And Boland’s other team, Wesbank, the South-West qualifier, are drawn in Pool D together with, amongst others, new KZN champions Durban Collegians and 2013 Community Cup champions Despatch.

The Qualifying results also mean that Boland, Eastern Province, the Golden Lions, KwaZulu-Natal and WP will each have two clubs in the tournament.

The 2015 Community Cup kicks off on 21 February, with five weeks of pool action reaching its climax on 21 March. The Easter Top 8 play-offs for the best two teams from each Pool will take place from 2-6 April, with the prized Gold Cup once again to be handed to the winners on Easter Monday.

All 12 Easter weekend matches will be televised live on SuperSport, as will the opening game.

As per usual, the make-up of the four Pools is based on the rankings from the previous tournament. 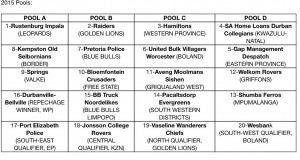