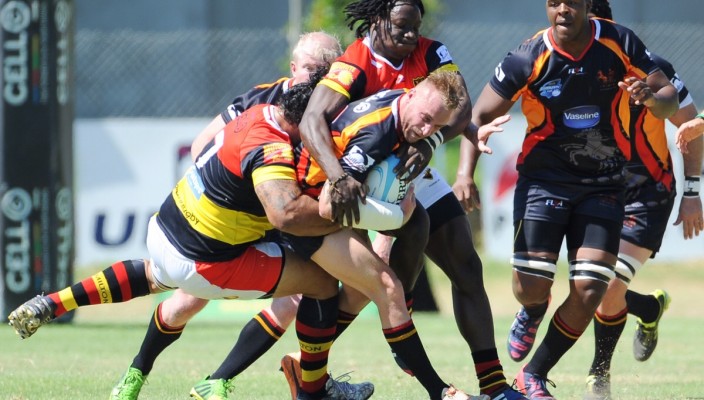 A last-gasp penalty from veteran flyhalf Monty Dumond gave Hamiltons a 40-all draw against Vaseline Wanderers on Saturday as the Cell C Community Cup came alive on an afternoon of high drama.

The unruffled Dumond, who slotted a post-hooter penalty to win the inaugural Community Cup title in 2013 for his former club, Despatch, nailed the 82nd-minute kick from a narrow angle to give his team a share of the spoils in a highly entertaining televised match which saw 10 tries and 80 points scored.

Elsewhere around the country there was also plenty of tries and high drama in wins for Durbanville-Bellville, PE Police, College Rovers, Pretoria Police, Villagers Worcester, Despatch and Durban Collegians in the country’s premier tournament for non-university clubs.

In Pool A, PE Police registered their first win after flyhalf Juan Smit scored a 67th-minute try to give the home side a hard-fought 15-8 win over Kempston Old Selbornians at Kemsley Park. In the Pool’s other match, Durbanville-Bellville bounced back from their round-one defeat to Old Selbornians in some style, running in 11 tries in front of 800 enthusiastic supporters for a 73-19 victory over East Rand Cranes Springs.

The results see Durbell top a congested Pool A on points difference ahead of their bye this coming weekend, which sees defending champions Rustenburg Impala travelling to East London and Springs hosting PE Police. A second defeat for Old Selbornians or PE Police at this stage will likely knock them out of contention for the top-eight Easter play-offs, which take place from 2-6 April at the Impala Club in Rustenburg.

In Pool B, two tries in the last two minutes, by lock Imilius Keyser and fullback Ruan van Loo, gave Pretoria Police a remarkable 31-26 win over Berlesell Bloemfontein Crusaders at the Clive Solomon Stadium in Heidedal – the second heartbreaking loss at home for Crusaders in as many weeks after their 20-16 defeat to Raiders in Round 1. In the Pool’s other match, 2013 silver medallists Jonsson College Rovers got their campaign off to an enterprising start with a 54-15 win over BB Truck & Tractor Noordelikes in Durban.

Police top Pool B with 10 points, but they face their sternest test when they host College Rovers in Groenkloof in round three in a match which may yet decide who finishes top of the group. Raiders meanwhile resume their campaign with a difficult away trip to Polokwane to face Noordelikes.

Pool C is too close to call, with leaders Hamiltons and Villagers Worcester facing each other in a mouth-watering WP vs Boland clash in Worcester this weekend. In the other match, Wanderers, fresh from their televised tournament debut, face the daunting task of travelling to George to play Evergreens, who return to action after their opening-round victory over Worcester.

And in Pool D, 2013 champions Gap Mangement Despatch found themselves 21-0 down after 20 minutes but rallied remarkably to score seven tries and 31 unanswered points in a 43-25 victory over Wesbank in front of 2,000 fans at the WJ de Wet Stadium. In the Pool’s other match, SA Home Loans Durban Collegians registered a bonus-point, 32-12 win over J&F Reclaiming Rovers Welkom in Durban in their first-ever Community Cup match.

Despatch, with a full house of 10 points, are favourites to progress, although they face a difficult away match in Emalahleni this Saturday to play Shumba Ferros, while Durban Collegians have an even tougher assignment in Malmesbury against Wesbank who, as they showed against Despatch, are one of the tournament’s most underestimated sides.