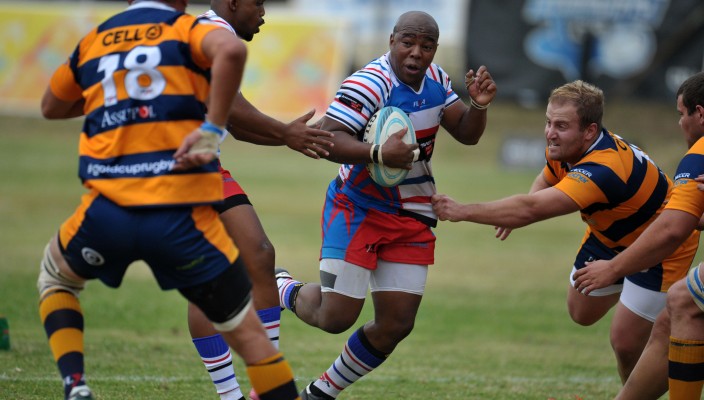 PHOTO CAPTION: Raiders centre Christopher Nqubuli, who scored two tries, runs at the Pretoria Police defence during his side’s 54-31 defeat in a Cell C Community Cup Pool B match at the Bill Jardine Stadium in Johannesburg on Saturday. Photo: ImageSA/SARU.

Six of the eight Easter play-off spots in this year’s Cell C Community Cup are still up for grabs going into the final weekend, after a penultimate round of pool action yet again characterised by late heroics.

Defending champions Rustenburg Impala and Pretoria Police are the only teams guaranteed of packing their bags for Sun City, where the sides who will contest this year’s knockout stages will be based. All 12 Easter play-off matches, which take place at Impala Rugby Club in Rustenburg from 2-6 April, will be televised live on SuperSport.

The Bobbies finished Pool B unbeaten after routing second-placed Raiders 54-31 at the Bill Jardine Stadium in a match which produced 13 tries. And in Pool A, hosts Impala raced into a 52-0 half-time lead over East Rand Cranes Springs before running out 78-7 victors over opponents who have consistently had the Rustenburgers’ number in recent years.

In Pool C, a 78th-minute try by eighthman Gerschwin Muller and an injury-time penalty by flyhalf Leegan Moos kept Evergreens’ unbeaten record intact when they drew 30-all draw against Aveng Moolmans Sishen in Kathu. There was even more drama in Pool D, where a bonus-point try by centre Sedwell Diedericks two minutes from time gave Wesbank a come-from-behind 27-23 away win over J&F Reclaiming Rovers Welkom.

Results across the four Pools mean that 10 teams will fight it out for six places in the final round, with the very real possibility of points difference and other tie-breaking mechanisms being required to separate a number of potential log-jams.

In Pool A, Impala travel to Cape Town to play Durbanville-Bellville, whom they must beat to top the group and so avoid a quarter-final against the rampant Pretoria Police. Durbell need just one point to knock Kempston Old Selbornians out of the race but it will be the East London team who go through should they beat East Rand Cranes Springs away with a bonus point and Impala beat Durbell by more than seven points and prevent them from scoring four tries.

The stakes are just as high in Pool B, where Raiders, third on 10 points, will host Jonsson College Rovers, with 11 points, at the Bill Jardine Stadium in what is effectively a knockout match, with the winners packing their bags for Sun City as runners-up behind Police.

Pool C is too close to call, with any two of Hamiltons, Vaseline Wanderers and Evergreens able to qualify and even log leaders Hammies not guaranteed of going through should they lose at home to Evergreens. With both sides having won two and drawn one of their group matches to date, the Cape Town clash is one of the higlights of the final weekend.

Second-placed Wanderers, who picked up their maiden Community Cup victory with 53-30 result against One Logix United Bulk Villagers Worcester, will likely grab one of the two qualifying slots on offer should they beat Aveng Moolmans Sishen and pick up a bonus point. Such are the permutations however that the Johannesburgers could either finish top or be knockout out of the tournament depending on what happens in the other match.

And in Pool D, three teams could possibly finish on 15 points, thereby requiring tie-breakers to see who goes through. Wesbank’s last-gasp try in Welkom means that third-placed SA Home Loans Durban Collegians have a monumental task ahead of them. The KZN champions must travel to Port Elizabeth, beat Gap Management Despatch with a bonus point, and deny the Eastern Cape side any points. A single bonus point for Despatch will not only guarantee their passage into the quarter-finals but also that of Wesbank.

The reason is that, should Collegians and Wesbank finish joint second on 15 log points, it would be the Bolanders who will advance even if they have an inferior points difference. This is because the tournament rules state that it is the winner of the match between the two teams that will prevail.

In this case, Wesbank’s 34-20 win over Collegians in Malmesbury in round three would prove crucial.