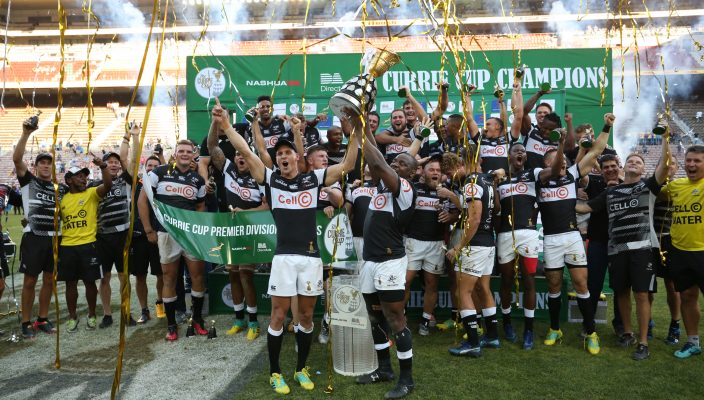 The Cell C Sharks claimed their first Currie Cup title in five years on Saturday in a brave reversal of fortunes after going down in last year’s final. They outscored DHL Western Province two tries to none for a 17-12 victory in a gripping match in the sweltering heat at DHL Newlands.

It was not the fairy-tale finish DHL Western Province were hoping for after winning all of their matches in the lead-up to the final in the competition proudly brought to you by DirectAxis Financial Services and Nashua.

It was a game of inches, as the Durbanites overturned a 6-0 halftime deficit to force their way over the tryline twice, while Robert du Preez converted both tries and added a penalty goal to steer the side to victory.

Cell C Sharks captain Louis Schreuder was delighted about the win and said: “It is an unbelievable feeling. I am so happy for the boys.

“We put in a lot of hard work and it paid off.

He admitted it was a tough final, saying: “It was a proper final.

“All respect to Western Province, they really brought their fight. But well done to our boys, this is very special.”

The first half was gripping as both sides threw everything at one another, which resulted in a physical tussle in which neither side gave an inch.

Both teams came within striking range of the tryline on two occasions in the first half, but neither team was able to breach the defence, which resulted in DHL Western Province winger SP Marais’ two penalty goals being the only points scored in the first half.

The Cell C Sharks came out firing in the second half and scored the first try of the match compliments of man-of-the-match Akker van der Merwe, and the successful conversion by Du Preez pushed the Durbanites into the lead for the first time.

Marais and Du Preez each added penalty goals in the following exchanges, which saw the visitors remain in a narrow 10-9 lead going into the fourth quarter.

Curwin Bosch had an opportunity to stretch the Cell C Sharks’ lead in the 59th minute with a penalty goal, but his shot went wide. But the visitors kept on fighting as the match progressed, and it paid off as Tyler Paul crossed the chalk after a number of phases to hand them a handy 17-9 lead in the last 10 minutes.

The hosts hit back with a penalty goal by Damian Willemse in the 75th minute, which allowed them to come within a converted try of the Cell C Sharks on the scoreboard.

The visitors, however, defended like demons to shut them out, which saw them lift the trophy for the first time since 2013.

In the SA Rugby U21 Championship final, the Xerox Golden Lions made good use of their point-scoring chances throughout their match against the Vodacom Blue Bulls and this paid off as they built up a 27-10 halftime lead and eventually claimed the title with a comprehensive 58-24 victory.

The team showed fantastic skill on attack and they did well to snuff out the gaps in the defence, and the rewards followed as they outscored the Vodacom Blue Bulls six tries to three.

Fullback Jean-Luc Cilliers also played a vital role in the victory with his accurate goal-kicking earning him an impressive 28 points thanks to six penalty goals and five conversions.

The first half of the SA Rugby U19 Championship proved to be a ding-dong battle, but the Cell C Sharks found their rhythm in the second half and played their way to a 40-27 victory.

The Vodacom Blue Bulls struck first with a try in the opening exchanges and the Durbanites retaliated minutes later, which proved to be the pattern in the first half, as the sides each scored two tries and two penalty goals to level the scores at 20-20.

The Cell C Sharks, however, took control of the match in the second half as they retained possession and applied consistent pressure on attack, which saw them add two tries in the third quarter for a valuable lead.

The Pretorians hit back with a try and they continued to fight until the final whistle, but the Cell C Sharks held their nerve and managed to shut them out, while they kicked a late penalty goal for a rewarding 40-27 victory. This capped off a fantastic season in which they won all their matches.

Results and scorers (click on the hyperlink for full scoresheet):