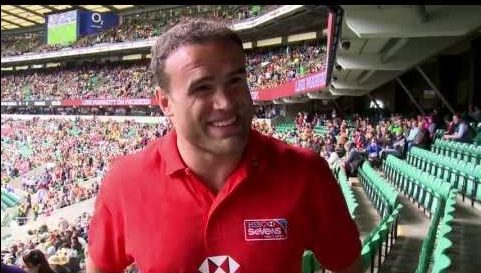 Newport-born Roberts, 33, has put pen to paper on a sensational move that will see the powerhouse centre make his return to Welsh rugby and link-up with Dragons with immediate effect.

Capped 94 times by Wales, Roberts featured in both the 2009 and 2013 British & Irish Lions tours and will arrive at Dragons following a spell with Super Rugby outfit Stormers in South Africa.

Dean Ryan, Director of Dragons Rugby, said: “It’s great news that we are bringing someone of Jamie’s quality to the region and we know he will make an immediate impact for us.

“He remains an ambitious and driven player and is looking forward to coming into our environment.

“To have his experience on the pitch will be a great addition to us and he will also be an excellent mentor for the younger players in our squad.”

Roberts has previously featured for Cardiff Blues, Racing 92, Harlequins and Bath during a glittering career.

His move to Dragons will see him join forces with current Wales internationals and recent recruits Jonah Holmes and Nick Tompkins.

Roberts said: “When I left Wales in 2013 to play my rugby outside my home country, I always promised myself that I’d endeavour to return and play in Wales again.

“Having had some wonderful experiences playing across three of the world’s top leagues in France, England and South Africa, I’m delighted to return to Wales to play with the Dragons and compete once again in the Guinness PRO14 and next season’s Champions Cup.

“I’m sincerely grateful for having this opportunity, especially given the current climate we find ourselves in. I’m very proud and grateful to have achieved a lot of what I set out to achieve in the game and now is a perfect time for me to help many of these young Dragons achieve theirs, as a collective and individually.

“When I sat down with Dean and looked through the Dragons squad, it was evident that there is enormous potential amongst the playing group. Although a handful are established internationals, a significant number of the group are not far off that level and I hope any experience I may be able to pass on can help them fulfil their potential.

“The opportunity to compete against the best Europe has to offer in the Champions Cup is exciting and I look forward to helping the region develop on the field as well as off it. Rugby in Wales finds itself in turbulent times, yet from crisis comes opportunity and I’m excited to help the sport win its way back to becoming the heartbeat of its people.

“Before playing through the junior ranks in Cardiff from the age of 15, my love for the game was born on the terraces of Rodney Parade. My Dad, Norman, has been a lifelong Newport Rugby supporter and for many years my brother and I would frequent the terraces on weekends and harness our love for the game I’ve been so fortunate to play professionally. No one would be prouder than him that I’m coming to represent the rugby supporters of Gwent.

“There has always been something very special about a packed out Rodney Parade and it’s something I’m looking forward to experiencing first hand on the pitch this season.”