Cheetahs need to end tour on a high 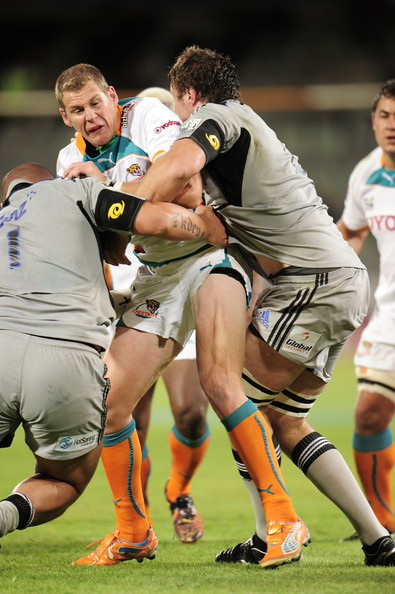 Barry Geel of the Cheetahs is tackled during the Vodacom Super Rugby match between Toyota Cheetahs and Hurricanes at theToyota Free State Cheetahs Rugby Stadium on April 16, 2011 in Bloemfontein, South Africa. Photo via Gallo Images

Morgan Piek – Sanity has prevailed this morning when Toyota Cheetahs coach Naka Drotske announced his side for their final tour match against the Hurricanes in Wellington on Saturday. Although the Cheetahs lost by 7 points in the dying minutes on an epic encounter against the much more fancied Crusaders this past Saturday, the Toyota Cheetahs has the right to walk away with their heads held high.

Drotske opted to start last weekend’s game with Lourens Adriaanse and Trevor Nyakane as the props instead of the more bullish Coenie Oosthuizen and solid WP Nel.  Let’s face it, the Cheetahs were taught a scrumming lesson or two in the opening twenty minutes of the game. The Crusaders Franks brothers are not the kind of guys that will lend a helping hand to two props that can’t coup against them. They’re not All blacks for no reason.

Don’t get me wrong in anyway, I am a fan of Trevor Nyakane and belief he has mountains of potential. I belief he is much better and more a solid prop than a certain Stromers prop who believes he is a centre.

Once again Ashley Johnson finds himself warming the bench. I really feel for the guy, week in week out he puts in a solid performance. It has to be said tough, with Davon Raubenheimer out of the side, Johnson has to compete with the like of Brüssow, Philip van der Walt and Justin Downey. Although the Downey has had very few games but one can see he is one tough nut to crack. He is a great find for the Bloemfontein based franchise.

The bad news for Ashley is that it’s not going to get any easier to make the side once Juan Smith and Lappies Labuschange return from injury. Smith is expected to be back when the Cheetahs face the MTN Lions in Welkom on 7 April.

The Hurricanes are always a less daunting match than the Crusaders, but the men from Central South Africa must not fool themselves either. The Hurricanes are have had a rather impressive season thus far and at the “Cake Tin” in Wellington they are a nasty opponent.

Once again the competitions leading points scorer, Johan Goosen, with have an arduous task lying ahead of him and will be tested to the max. Not only will he have to deal the notorious Wellington wind, but, he will be in direct competition with New Zealand’s best flyhalf in the 2012 tournament, Beauden Barrett. Being of similar age, I foresee the two of them facing off against each other in both Super Rugby and test rugby for many years to come.

The most positive selection in my view is the inclusion of Piet van Zyl as the starting scrumhalf. Van Zyl and Goosen complement each other in a big way. We’ve all heard the old cliché “It’s all about combinations”, none are more important than the Flyhalf-Scrumhalf combination. Van Zyl had a fantastic Currie Cup last year and has proven to be a very suitable replacement for Sarel Pretorius. I cannot wait to see the two of them against each on when the Waratahs play in Bloemfontein come 26 May.

With form the Cheetahs displayed in their past two games, I really belief they can beat the Hurricanes in Wellington Saturday. It’s just a matter of believing in themselves and I think they are starting to do that. They have shown that they can play an expansive game. The most important factor is a solid scrum. Once the backline gets good ball they can strike from anywhere, anytime.

With a world class finisher like Willie le Roux in the side, we could be in for a very exciting encounter indeed.

The team to face the Hurricanes is: