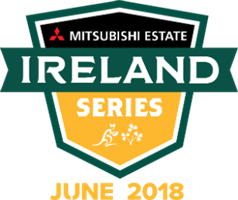 Qantas Wallabies coach Michael Cheika has named an unchanged 23 for the second Test of the Mitsubishi Estate Ireland Series.

Cheika resisted the urge to tinker with a winning formula for the clash at AAMI Park in Melbourne despite the return of flanker Ned Hanigan (knee injury) and lock Rory Arnold (suspension).

Saturday night’s Test will be the first time Cheika has named an unchanged 23 for back-to-back matches in his 46 games in charge of the Qantas Wallabies, after taking the reins in November 2014.

The Wallabies will persist with a six-two split amongst the finishers, with rain and wind forecast in Melbourne on Saturday.

Ireland last played the Wallabies in Melbourne in 2008 when the Wallabies won 18-12 in a tight tussle at the then-Colonial Stadium.

The Mitsubishi Estate Ireland Series is the first-ever three Test Series between the two nations despite them having faced-off in 34 Tests over their 90-year history.

Tickets are selling fast for the AAMI Park clash with the third Test at Allianz Stadium in Sydney already sold out. For tickets, visit ticketek.com.

FOX SPORTS will showcase every match of the Mitsubishi Estate Ireland Series LIVE with no ad-breaks during play and in HD.

All matches will also be screened LIVE and free in HD on TEN and WIN Network and streaming ontenplay.com.au