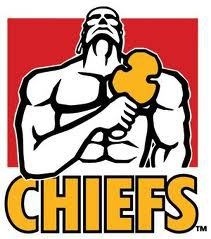 Chiefs embark on new era off the field

Investec Super Rugby franchise the Chiefs today ushered in a new era with a group comprising six provincial unions and private investors being granted the licence to operate the franchise until 2020.

The unions hold 50 per cent of the shares in the Chiefs Rugby Club and private investors from Taranaki, Waikato and elsewhere; 50 per cent (see shareholding structure below). The shareholders have invested $3.3 million into the new entity.

“We are very pleased the Chiefs can now face the future with renewed confidence and build on the impressive on-field success the franchise has enjoyed of late,” said New Zealand Rugby Chief Executive Steve Tew.

“The new arrangement injects fresh thinking and new capital to put the Chiefs on a sound commercial footing. We are also impressed with the calibre of the private investors who have decided to back the team. All this augers well for the long term financial well-being of the Chiefs.”

Taranaki Rugby Football Union will now transfer into the Chiefs region, after being a part of the Hurricanes franchise area since the inception of Super Rugby in 1996.

This will see New Plymouth’s Yarrow Stadium host two Chiefs matches in 2014 against the Blues on 9 May and the Warratahs on 31 May. Two matches will be played in 2015.

Waikato Stadium will continue to host a minimum of five home matches per year with six Super Rugby matches allocated in 2014. Match allocation beyond 2015 will be made on a year by year basis.

“We carefully weighed up the involvement of Taranaki Rugby in this and were mindful of some fans’ loyalty to the Hurricanes as well as some fans’ unease in Waikato,” said Tew. “However, on balance, and supported by fan research, we found this new arrangement would be broadly supported by fans in both regions.

“The good news for Taranaki is that fans get to enjoy rugby from the toughest and most exciting inter-regional rugby competition in the world. This taste of top class action, is not only good for fans, but will sure to inspire young players as well.”

Chiefs Chief Executive Andrew Flexman said; “This is an exciting new era for the Chiefs Rugby Club and we are privileged to have the backing of a diverse and committed group of investors who wish to share in the growth of our organisation.”

Taranaki RFU Chairman Lindsay Thomson said: “Taranaki Rugby is excited to have the opportunity to be an investor and stakeholder in the licence being issued to the new owners of the Chiefs. This gives an opportunity to the Taranaki rugby public to be able to watch regular Investec Super Rugby games at Yarrow Stadium, in what is the best professional rugby competition in the world. Having high quality games in our own back yard allows us to foster and grow the game in the Taranaki province.”

“Our aim all along was to build a stronger foundation for the professional game in this country while ensuring it maintained its ability to feed a winning All Blacks team so we are very pleased with the progress we have made in rolling out the new operating model,” said Tew.

New Zealand Rugby confirmed it was also looking closely at the possibility of embarking on a similar process for the Highlanders in 2014.

An Establishment Board has been set up. This will be responsible for appointing the new board of seven members which will be comprised of five independent directors and two appointees representing investors. This process is expected to take two months.

Expressions of interest were called for in December 2011 for four of the five licences. The Highlanders were not part of the process.

A Super Rugby Licensee’s responsibilities will include:
• management of the team both on-field and off-field including, the professional development for members of the squad
• marketing promotion of matches and the team
• the Licensee will retain predominantly gate and some sponsorship income and pay administration, additional coaching and management staff, training facilities, match operations, and marketing costs