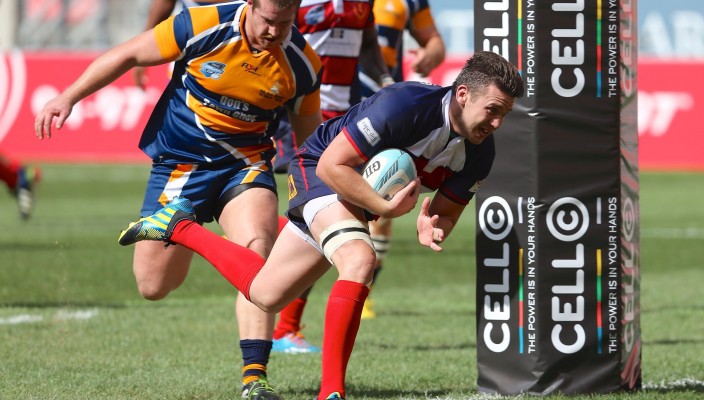 THE race to Sun City goes down to the wire on Saturday when 10 of South Africa’s top non-university clubs fight it out for the six remaining places in next month’s Cell C Community Cup Easter Play-offs.

The Play-offs will take place at the Rustenburg Impala Club from 2-6 April, with all eight teams being based at the Pilanesberg resort. Going into the final round, only defending champions Rustenburg Impala and Pretoria Police are assured of a place in the quarter-finals, with points difference and other tie-breakers likely to decide the other pools come Saturday night.

“This year’s tournament has taken a massive step-up in terms of playing standards and competitiveness, while crowds have come out in their thousands in places like Malmesbury, Pacaltsdorp, Worcester and elsewhere to watch the drama unfold,” said SARU CEO, Jurie Roux. “Two years ago you could have picked a winner beforehand from two or three teams at most. Going into the final round, it’s impossible to predict who will make it to Rustenburg, let alone who will lift the Gold Cup on Easter Monday.

“When pre-tournament favourites such as 2013 champions Gap Mangement Despatch, Jonsson College Rovers and Hamiltons need to win their final-round matches just to qualify, that says a lot about just how far the Cell C Community Cup has come in a very short space of time.”

In Pool A, Impala lead with 14 points going into their final match in Cape Town against second-placed Durbanville-Bellville, on 10. The champions must win to guarantee top spot in the group, while Durbell must pick up at least two log points to guarantee qualification and shut out third-placed Kempston Old Selbornians (6pts), who will keep their hopes alive with an away victory over East Rand Cranes Springs.

With Pretoria Police safely through, second place in Pool B is a straight shootout between third-placed Raiders (10pts) and KZN’s Jonsson College Rovers (11pts) at the Bill Jardine Stadium in Johannesburg.

“To win the competition you have to beat the best sides and it is a great challenge to go to the Bill Jardine Stadium,” said Rovers’ head coach, Derek Heiberg. “The character and resolve of a good team is tested at times like these and if you want to get to Rustenburg you’re going to have to put in the hard yards and graft.”

Pool C is also too close to call. Second-placed Vaseline Wanderers (10pts) will most probably qualify should they pick up a bonus-point victory at home against bottom-placed Aveng Moolmans Sishen. This scenario will likely reduce the group’s other match, between two unbeaten sides in Hamiltons (12pts) and Evergreens (10pts) in Cape Town, into a knockout game for the other spot.

And in Pool D, third-placed SA Home Loans Durban Collegians have the Herculean task of having to beat Gap Management Despatch with a bonus point in their own backyard, while denying the 2013 champs any bonus points, to leapfrog Wesbank into the play-offs.

A victory under these circumstances and by 16 points or more will see Collegians top the group, while a bonus point of any kind for Despatch will see them and Wesbank go through, regardless of what Collegians do. This is due to the tournament rule which states that, in the event of two teams being tied on log points, the winner of the match between the two teams will progress. If three teams finish tied on log points, and no one team has beaten the other two, then points difference will decide who qualifies.

“Nobody else can control our destiny – we know that a win with five points could put us in the Easter tournament,” said Collegians’ head coach, Robin Swanepoel. “They’re the 2013 champions so they’ve got everything to offer. As far as I’m concerned we go down there as the underdogs. We’re new to the competition, we haven’t been here before but we’ll accept the challenge.”

The Easter quarter-final line-up will be confirmed on Saturday evening after the final round has been concluded.