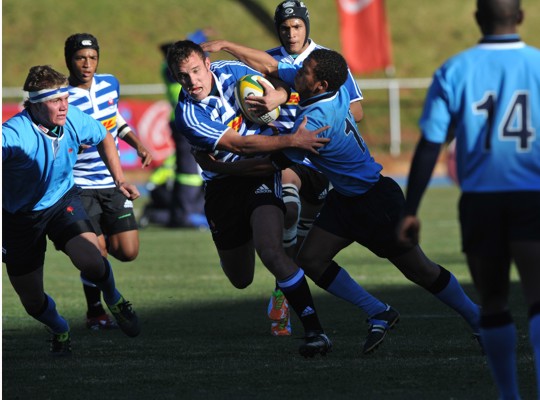 Action from the U18 Academy Week. Photo via supersport.com

Results that were in doubt till the last play of the match highlighted action at day two of the Coca-Cola Academy Week for Under-18’s, played at the picturesque Boland Stadium in Wellington on Tuesday.

A number of matches were won or lost in the dying seconds of action, with one result ending in a draw on a day where an appreciative crowd were treated to some great rugby action.

It was a good day for hosts Boland, who saw both their teams victorious, Western Province and the Blue Bulls, who had to battle hard to beat South Western Districts.

Eastern Province and the Golden Lions were also impressive in their victories.

In the last match of the day, Western Province played with great purpose in the first half against Free State and had a deserving 15-3 lead at the break.

They managed to create space for their speedy outside back and tested the Free State defence at every occasion.

The Bloemfontein side managed to keep WP out for a while, but after WP fullback Heinrich Buhr scored a brace, there was no way back for Free State.  WP ran riot in the last quarter and won 51-8..

A summary of other action:

The Blue Bulls started off like a house on fire against SWD and scored three early tries to race into a 23-6 lead at the break.

They used their physical power to good effect and dominated the smaller SWD pack. The Eagles came back well in the second half, capitalizing on some poor handling by the Blue Bulls, scoring some great team tries on the counter-attack.

The Blue Bulls found their groove in time again though and won convincingly in the end.

Two tries by the smallest player on the field, Pumas left wing, Sipho Twala, was the highlight of the tight encounter between the Mpumalanga side and Border.

The winger used his express pace to outsprint his opposition on two occasions and although Border came back well in the second half, they could not get the winning score as a late try was not converted.

The Red Valke started strongly against Griquas and held a comfortable 7-0 lead after 20 minutes of play. Griquas came back strongly in the second part of the half and were leading  8-7 at the break.

The second half belonged to the Valke though as Griquas lost two players to the sin-bin at the same time. After that, Valke totally outplayed their opponents, scoring almost at will.

The match between KZN Country Districts and Griffons was very entertaining.

The coastal side had a 12-7 lead at the break, but the Griffons scored in the corner to draw level. KZN then scored a break-away try to take the lead again, but a converted try by Griffons flyhalf Meyer Marais took back the lead.

A penalty edged KZN ahead, but a drop goal by Marais seemingly won the match for his side. Not so, as KZN scored in the final play of the match to secure a memorable 25-22 win and stay undefeated.

Other results on day two were: