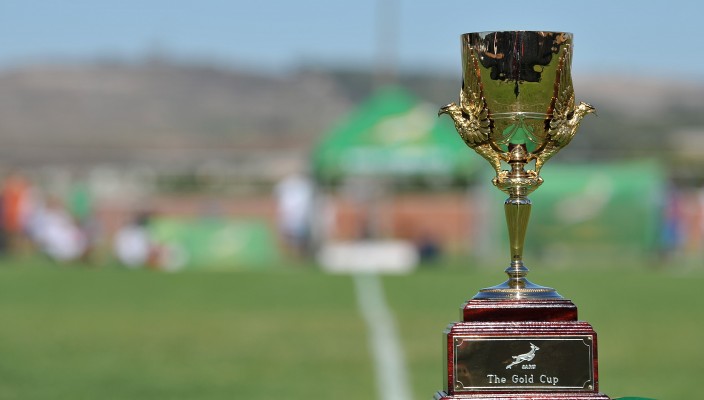 PHOTO CAPTION: The Community Cup national championships for open clubs will be known as the Gold Cup from 2016 – named after the tournament’s iconic winner’s trophy. Photo: Roger Sedres/ImageSA

Club rugby’s revival will enter a ‘Golden’ era from 2016 with a host of exciting changes to the popular Community Cup national championship for non-university clubs, following a decision of the Executive Council of the South African Rugby Union (SARU).

The Community Cup, which replaced the old national club championships in 2013, will move from its pre-season timeslot to provide a more logical post-season climax to the South African club season and will henceforth be known as the Gold Cup – named after its iconic, solid-gold winner’s trophy.

The Gold Cup will also have an international flavour from 2016, with the non-university champions of Namibia and Zimbabwe joining 18 of South Africa’s best open clubs in the 20-team tournament.

“The old Club Championships did not have a sponsor, television coverage was virtually non-existent, crowds were poor, players weren’t well conditioned and the standard of play was average at best.

“We hoped the Community Cup would be a catalyst for the revival of the club game at all levels, and I’m happy to say we’ve achieved those initial goals and can now move on to the next phase.”

“We’ve had a great sponsor in Cell C for the past three years, during which we’ve seen a tournament that has had 42 matches broadcast live. A total of 9,000 people attended this year’s Easter play-offs in Rustenburg where the standard of play was among the highest seen from open clubs.

“There has also been a knock-on effect at provincial level. The competitiveness of domestic leagues has increased significantly and clubs have become far more professional in their approach as they go all out to qualify for the Community Cup,” Roux added.

He said the addition of clubs from Namibia and Zimbabwe would expand the Gold Cup into a true African club tournament. “Strategically this decision is in line with our commitment to assist our neighbours so that they have the best possible chance of qualifying alongside South Africa for the 2019 Rugby World Cup in Japan.

“Namibia’s best players will benefit from playing in the expanded Currie Cup in 2016 and the incorporation of their champion club into our tournament structures will help strengthen their next tier of players.

“Zimbabwe came within a whisker of qualifying for the World Cup and participation in the Gold Cup will likewise revive their top domestic league and expose their players to a higher level of competition.”

The Gold Cup will kick off on Saturday, 10 September 2016, with 20 clubs once again competing in a Rugby World Cup-style format, with five weeks of pool stages and the top two from each group progressing to the knockout stages. The tournament will feature 47 matches in all.

“From a player welfare point of view, having to play three matches in five days was no longer feasible and we have listened to our club players and coaches in this regard,” said Roux.

“We also believe that moving away from a central play-off venue is a great carrot for clubs to perform. Now every one of the 20 teams can go into the tournament knowing they have a chance to host prestigious play-off matches, including the all-important televised final, at their home ground.”

Durbanville-Bellville, who capped a fairy tale 2015 season by winning the Community Cup having qualified through the back door of the repechage rounds, will return in 2016 to defend the Gold Cup trophy they lifted in Rustenburg earlier this year. They, together with the Namibian and Zimbabwean teams, will be joined by the best non-university clubs of the 14 provincial unions plus Limpopo from the 2015 season. A full list of the participating teams will be confirmed early in the New Year.

The remaining two qualifier slots will be decided by 2016’s provincial leagues, with those teams who finish as the best open clubs in their leagues next year, having not done so in 2015, playing off for the last two Gold Cup slots.

“We have the once-off situation whereby there will have been two club seasons between the last Community Cup and the Gold Cup,” said Roux. “We therefore had to strike a balance between rewarding those clubs who performed in 2015, and ensuring that the 2016 season has meaning and that clubs across the country have no shortage of motivation to perform in their domestic leagues.”

Roux added that further significant announcements around the Gold Cup would be made in the New Year.