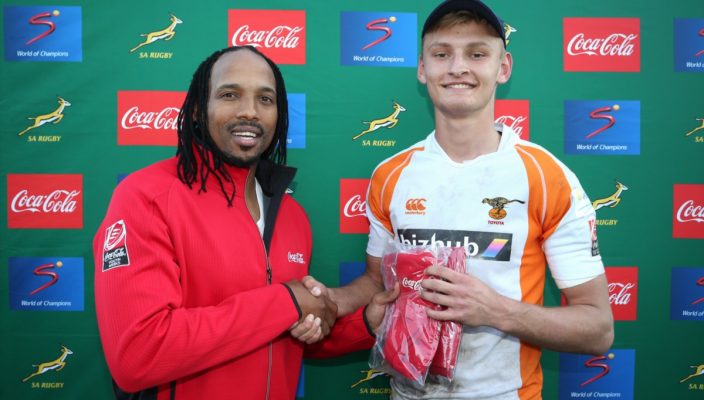 Richard Kriel from the Cheetahs was recognised as the second Coca-Cola Hero of the Day for the 2018 U18 Coca-Cola® Craven Week taking place at Paarl Boys High.

The prestigious Coca-Cola Hero of the Day award is presented on each day of the tournament in recognition of a game changing ‘hero’ moment.  Richard was selected for the award by a Coca-Cola appointed Hero of the Day Panel, led by Springbok legend Akona Ndungane.

In a tightly contested match, the Bulls team lead the game 15-7 with their forwards strongly dominating the game. Richard received the ball just inside the Blue Bulls 22m where he kicked it past his opposite number, collected the ball and scored a try that got the Free State back into the game. This crucial try steered the Free State team to a great win.

“It is a huge honour for me to win the Coca-Cola Hero of the Day today, the team put in a massive effort to beat the Blue Bulls, so I am happy that my contribution helped win the game for the team,” said Richard.

“As the panel, we really thought Richard’s moment was a special one as both teams were fighting for momentum in a very tight game. Richard brought that momentum back for the Free State which helped them win their match- congratulations to Richard and his team!’ reflected Akona.

Coca-Cola® Hero of the Day