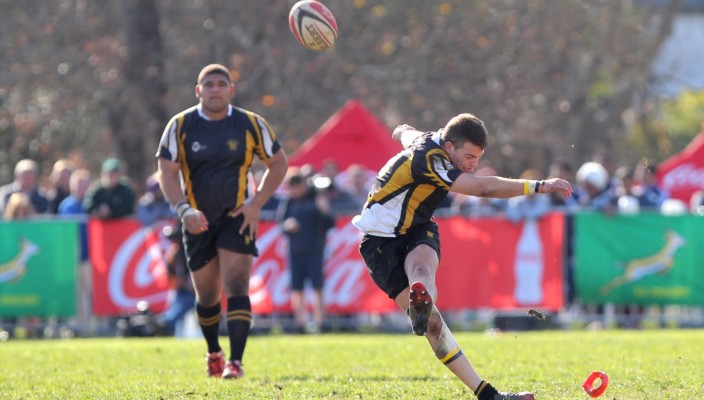 Adriaan van der Bank from Boland has been named the Coca-Cola® Hero of the day for day 3 of the U18 Coca-Cola® Craven Week.

The prestigious Coca-Cola® Hero of the Day award is presented on each day of the tournament in recognition of a game changing ‘hero’ moment. Adriaan was selected for the award by a Coca-Cola appointed panel of rugby experts after he kicked a 45m penalty goal and a drop goal in the dying minutes of the game to help his team beat Border.

‘Our fullback, Riaan van Rensburg, normally takes the long kicks for post but when we got the penalty my captain believed in me so I took the kick. The wind was blowing from behind and I knew that I could do it,” said Adriaan.

“A couple of minutes later we found ourselves back in their half and with time running out I knew that if I got a drop kick Border will not be able to win the game. The forwards won the ball for me and I got a great pass from our scrumhalf Louis Strydom, which gave me time to kick it over.”

Fetsi Mbele, Coca-Cola South Africa’s Senior Communications Manager: Brand Experience commented, “Congratulations to Adriaan van der Bank on being selected as Coca-Cola® Hero of the day for day 3 of the Coca-Cola® Craven Week. At Coca-Cola® we believe that it is essential to put platforms such as the Coca-Cola® Youth Weeks in place for players of all ages to reach their full potential. The Coca-Cola® Youth Weeks are Where Heroes Are Made and for many of the players here this week, this is just the beginning of a future in the game. I look forward to following the likes of Adriaan as they carve out a career for themselves in South African rugby”

In addition to awarding the Coca-Cola® Hero of the Day to players at the u18 Coca-Cola® Craven Week, Coca-Cola has taken the “Hero of the Day” concept to social media!* As an acknowledgement of the massive role that schools play in the development of South Africa’s future rugby heroes, Coca-Cola is searching for South Africa’s ultimate school rugby hero. Whether it’s the star flyhalf, a dedicated supporter or the u13 water boy, they want to know their story. The winner and their school will be awarded with amazing rugby related prizes.*