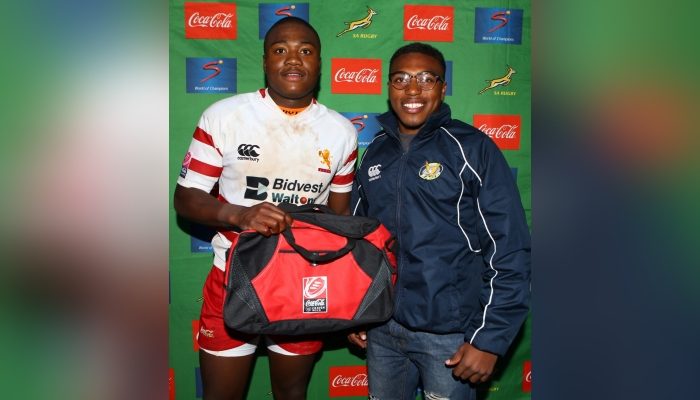 Darren Adonis from South Western Districts has been named the Coca-Cola® Hero of the day for day 4 of the U18 Coca-Cola® Craven Week.

The prestigious Coca-Cola® Hero of the Day award is presented on each day of the tournament in recognition of a game changing ‘hero’ moment.  Darren was selected for the award by a Coca-Cola appointed panel of rugby experts, led by SuperSport anchor Elma Smit.  His hero moment came after taking a pass from a lineout and setting off on an epic run, dodging tackle after tackle to set-up a teammate to score what proved to be the match winning try in their match against Boland.

‘Winning the Coca-Cola Hero of the Day was the highlight of my tournament so far. We had a tough start at the beginning of the tournament losing to the Blue Bulls but we came back nicely today to win against a very strong Border side,’ said Darren.

“A big congratulations to Darren on his selection as the Coca-Cola® Hero of the Day.  The match between SWD and Boland was one of the most exciting of the Coca-Cola® Craven week so far and was calling out for a dramatic winning moment.  Darren provided that moment with his heroic run which set-up the try and took his team to victory,” added Elma Smit.

Fetsi Mbele, Coca-Cola South Africa’s Senior Communications Manager: Brand Experience concluded, “The Coca-Cola® Craven Week is Where Heroes Are Made and for many of the players here this week, this is just the beginning of a future in the game.  I look forward to following the likes of Darren as they carve out a career for themselves in South African rugby.”