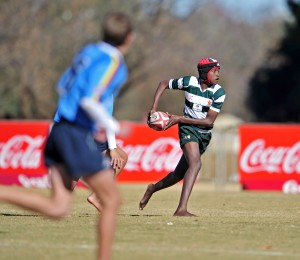 Sporting excellence doesn’t happen by accident, it takes a grand design, plenty of hard work and a solid support structure. That certainly applies to this country’s consistent prowess, at all levels, in rugby and this is evident at Grey College in Bloemfontein where the 41st annual Coca-Cola under-13 Craven Week is taking place.

The under-13 event is the entry level into SA Rugby’s youth development structure and the foundation phase of Coca-Cola’s Youth Week programme – the under-16 Coca-Cola Grant Khomo Week and the under-18 Coca-Cola Academy and Craven Weeks are the other legs of the partnership between Coca-Cola and the national rugby body.

The under-13 week is unique in world rugby. Nowhere else is there an interprovincial tournament at this level. And it’s only possible because of the extraordinary dedication of rugby people. Attending the week is chief executive, Jurie Roux, medical head Clint Readhead and manager of junior teams, Yusuf Jackson.

The success is as a result of a formula that has been developed over the 40 year and it forms the solid foundation for the five years of high school rugby that lie ahead. Under the circumstances, the players in action are not the finished item yet. They are at an age when physical growth is only just starting.

However there are quite a few giants around who have already experienced a spurt in growth and they tend to dominate the matches they are in. But everyone understands that the smaller players are not going to stay that way for much longer, so the emphasis is on skills rather than brute force.

“The Coca-Cola Under 13 week is a rugby-lover’s dream and a rich breeding ground of future talent,” said Craig Van Niekerk, Coca-Cola Marketing Asset Manager. “It’s also the first step in the process that makes South African rugby great. Further, we utilise the opportunity to promote the development of healthy lifestyles which forms part of our ‘Live for a Difference’ strategy.”

Wednesday is a rest day at the week. All the teams will be playing at the Free State Stadium on Thursday, with the fixtures for the final day, including the last game – the unofficial final – being announced at the end of the day’s play