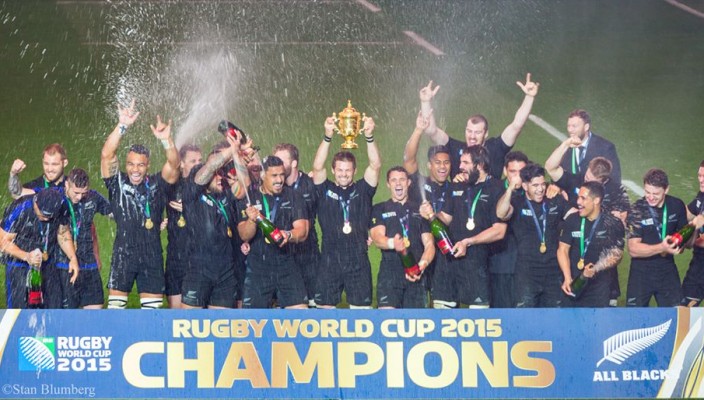 Congratulations All Blacks – World Rugby Team of the Year

The All Blacks have won Team of the Year for the sixth straight year, 112-Test cap first-five-eighth Dan Carter bows out as Player of the Year for the third time, this year’s most prolific tournament try scorer Julian Savea won International Rugby Player’s Try of the Year award for his bustling five pointer against France in the RWC 2015 quarterfinal and new wing sensation Nehe Milner-Skudder earned the Breakthrough Player of the Year Award after a stunning debut year in the black jersey.

New Zealand Rugby Chairman Brent Impey congratulated the All Blacks on their success.

“New Zealand Rugby and all their fans across the world are immensely proud of the achievements of the All Blacks in 2015. Back-to-back Rugby World Cup triumphs is an extraordinary feat. It’s a huge credit to the skill, determination and courage of an amazing group of athletes who had incredible self-belief and it showed at Twickenham on Saturday.

“Behind them Steve Hansen and the rest of the management team ensured they were in the best possible position to win the World Cup away from home for the first time and be successive champions. These awards are also a tribute to their great planning, strategic thinking and the high performance culture they have instilled. It all reflects many years of hard work, focus and dedication.

“Everyone has made incredible sacrifices to help the All Blacks to be in this position today as back-to-back World Champions. They richly deserve to be named Team of the Year. We also acknowledge Australia who pushed us hard at Twickenham, and showed incredible spirit and flair in making for an unforgettable World Cup Final.

“I want to make special mention of Richie McCaw who has led so well from the front for so long in one of rugby’s most demanding positions. His contribution to this success is enormous. An extraordinary athlete, and an incredible leader who enshrines the values we hold dear of humility, professionalism, integrity. All of rugby is richer for the example he has shown.

“I also want to acknowledge the contribution of departing Rugby World Cup squad All Blacks Dan Carter, Ben Franks, Ma’a Nonu, Keven Mealamu, Colin Slade, Conrad Smith and Tony Woodcock. You have all played pivotal roles in making this All Blacks team the champion side it is and we wish you well in the next chapter of your careers.”

The award for Kendra Cocksedge caps off a great year for the Black Ferns who enjoyed a clean sweep in the inaugural Women’s Rugby Super Series, where they beat world champions England, along with the United States and hosts Canada. Portia Woodman was also a key player in the New Zealand Women’s Sevens team’s third successive Women’s Sevens Series triumph.

“The awards for Kendra and Portia underline the great depth we enjoy across the game,” said Impey. “We congratulate them both for the part they have played in strengthening women’s rugby in this country.

“These awards show that rugby in New Zealand is in good heart. We thank our fans wherever they are for their continued support and the part they play in helping rugby unify and inspire New Zealanders.”