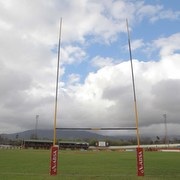 The countdown to the final stages of the Absa Currie Cup First Division will begin this weekend as the round-robin stages drops down to four rounds, which is set to spark the scramble for semifinal places.

As things stand the Steval Pumas have a 13-point lead at the top of the table, with the SWD Eagles, EP Kings and Leopards trailing with 34, 33 and 32 points respectively, while the fifth-placed Regent Boland Cavaliers trail a further four points back.

With the top four teams facing each other this weekend, however, there could be a switch at the top of the table.

In Friday’s matches the EP Kings host SWD in Port Elizabeth and the Steval Pumas take on the Leopards in Nelspruit. On Saturday the Valke meet the Regent Boland Cavaliers in Kempton Park and the Down Touch Griffons go up against the Border Bulldogs in Welkom.

The clash between the EP Kings and SWD Eagles in Port Elizabeth is expected to take centre stage as the teams battle it out for second place on the log to boost their home semifinal hopes. Both teams have performed well consistently this season and come off morale-boosting victories, which will set the scene for a nail-biting battle. SWD will rely on their superior attack to boost their chances of a victory, but they have also leaked more tries – a weakness which the home team will want to exploit.

The fact that the Vodacom Super Rugby players, including Kings flyhalf George Whitehead, hooker Hannes Franklin and loose forward Darron Nell, are also beginning to find their feet in the competition will also mentally boost the Kings confidence. However, the Kings will have to mark SWD wing Alshaun Bock, in particular, as he has a knack at scoring tries, which has seen him cross the tryline 16 times in 10 matches.

The unbeaten Steval Pumas will enter their clash against the Leopards as favourites with home ground advantage and form counting in their favour. A victory this weekend would virtually assure them of a home semifinal. The Leopards, meanwhile, face hard work ahead to secure a semifinal spot. They will be aware that the chasing Boland will target their clash against the Valke for a bonus-point win, which could see them overtake the Leopards on the log if they were to suffer a defeat.

Desperate times call for desperate measures which has prompted the Leopards to shift regular flyhalf Adriaan Engelbrecht to inside centre to bolster their midfield, while Gerhard Nortier will start at flyhalf. Given the pressure on the Leopards to win their remaining matches, they are expected to put up a determined fight.

In Kempton Park the Regent Boland Cavaliers will back themselves to beat the Valke, especially with the home team having won only match so far. The fact that a victory would improve their chances of securing a semifinal berth will also inspire them to come out firing. Given both teams’ try-scoring abilities, they are expected to be closely matched on attack after racking up a series of bonus points for tries this season. The visitors, however, will be determined to exploit the Valke’s lapses on defence, which has seen them concede an average of six tries a match.

The clash between the Down Touch Griffons and Border Bulldogs in Welkom, meanwhile, is expected to be epic as the teams try to use their physical forwards to out-muscle the opposition. Both teams, however, also have play-makers, who could ignite some magic in space. But with both teams left with only a mathematical chance of sneaking into the semifinals, they will be playing mainly for pride.