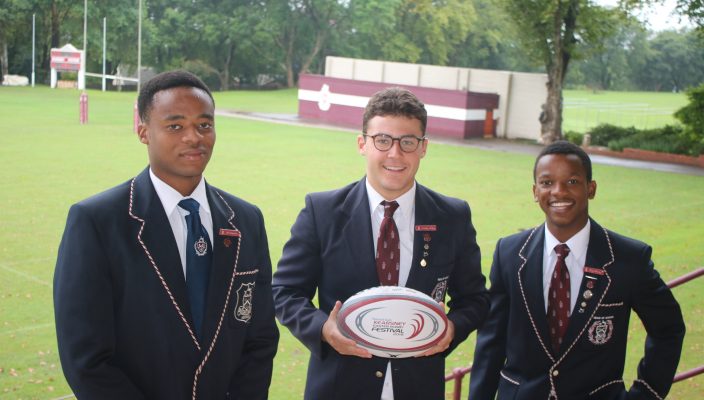 Exciting, exhilarating rugby will be on view at the 11th annual Standard Bank Kearsney Easter Rugby Festival starting this Thursday (29th).  Twelve schools, all known for their rugby prowess, will each play three matches.  Bumper crowds are expected at the Stott rugby field for the six matches each day.

Three KZN schools will be represented, Glenwood, Durban High School (DHS) and hosts Kearsney. There is one debutant team this year, Welkom Gimnasium from the Eastern Free State. Other schools that are represented are HTS Drostdy from Worcester in the Western Cape, Pretoria Boys High, HTS Middelburg, Selborne from East London, Dale College from King Williams Town, Queen’s College from Queenstown, Hoërskool Framesby from Port Elizabeth and Hoërskool Noord-Kaap from Kimberley.

Festival play days are Thursday, Saturday (31st) and Easter Monday (2nd), with kick-off at 9.30am each day.

Glenwood will be one of the favoured teams, having 12 players who were represented last year and, together with the convincing win in their only full match played against Maritzburg College last Saturday, could be the side to beat. If they had a weakness it was in the tight scrums but, with a heavy pack, this can be rectified. Glenwood locks are over 1,90 metres and this will make them competitive in the lineouts. The dynamic backline with pace and good handling will enthuse rugby lovers.

Their first match is against Drostdy, another that was one of the better sides last year.  Together with Glenwood, they are the two top-ranked sides at the festival and so the match on Thursday will be a humdinger.

Hosts Kearsney traditionally play the first match of the festival and this will be against HTS Middelburg. The latter were not at their best in 2017 and will likely be a better combination this year. If Kearsney can pull off a win in this first game, their confidence will increase. The hosts have played four matches this season, with a loss against Pionier in Vryheid, but a good win against Michaelhouse and a narrow one-point victory against Northwood, where they had to work hard to come from behind.

DHS have lost a number of their better players and will not be as competitive as they were last year. They have only played one full match and that was against Hilton, which they lost. DHS will play Selborne in their first match, always a very competent side, and the Durban team will do well to keep the score close.

Dale College, always a crowd pleaser with their unconventional rugby style, particulary by the backs, will be strengthened this year by some heavier forwards. If they win more of the ball they could surprise Framesby on the first day and Glenwood on Saturday.

There will be other matches where results should be close, but spectators will want to see fast movement, good hard and clean tackling, as well as good sportsmanship prevailing, no matter the result.

At the conclusion of the final match on Monday, three players will be identified as having great promise in the future and will be offered bursaries to the Sharks Academy. This comprises a contract to the Academy and a tuition bursary with an academic institution.

A primary schools’ fixture between Umhlali Prep, Hillcrest Senior Primary and Highbury against the KZNRU u13 Ibutho development team will kick off each day’s proceedings at 8.30am.

Gate entry is R25 per person.  Ample secure parking will be available; as well as numerous food outlets, a beer tent and KidZone to ensure a fun-filled family-orientated Easter weekend.

Fixtures and festival information, including live streaming links for each game, are available on www.kearsney.com