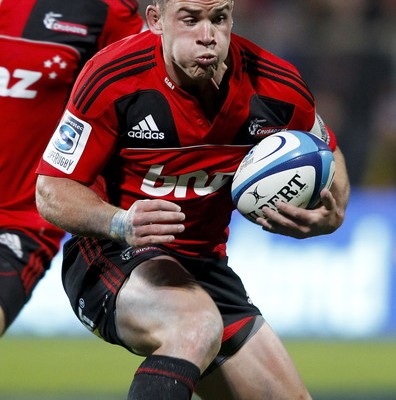 BNZ Crusaders centurion and 44-Test All Black Ryan Crotty has announced he will leave New Zealand rugby at the end of the year, and link up with Japanese club Kubota Spears.

The long-serving Crusaders midfielder confirmed the news on Monday evening in Christchurch.

“The All Blacks, Crusaders and Canterbury rugby have been such an important part of my life and I’m grateful for every opportunity I’ve had to represent my country, my province and my family over the years,” Crotty said.

“I’m a proud Cantabrian and Christchurch will always be home, but I’m really looking forward to taking on a new challenge in the Top League as part of the Kubota Spears club. I know I’ll look back at the end of my career in New Zealand with really fond memories of the experiences I’ve had and what I’ve achieved alongside my good mates, but for now my focus is enjoying the season ahead and helping to lead this Crusaders side one last time in 2019.”

Crotty progressed through the Canterbury and Crusaders development programmes, making his debut for Canterbury back in 2008 and accumulating 67 provincial caps to date. He became Crusader No. 134 in his Investec Super Rugby debut against the Hurricanes in Christchurch the following year.

The 30-year-old currently has 142 Super Rugby caps to his name, having made his 100th appearance in the Crusaders’ 2016 win over the Jaguares at home. Alongside Matt Todd, he has been vice-captain of the sides that won consecutive Super Rugby titles in the 2017 and 2018 seasons.

BNZ Crusaders Head Coach Scott Robertson said: “2019 is Crotts’ eleventh season with the Crusaders, which is indicative of his loyalty. He’s a local boy, who has made an immense contribution to rugby in this region over an extended period of time and we’re really proud of him.

“Crotts is an outstanding leader in our backline and has delivered consistent performances in our midfield for more than a decade. We’re fortunate to have one more season with him in 2019 and an opportunity to tick off more important milestones before he departs for Japan,” Robertson said.

Crotty made his All Blacks debut against the Wallabies in Sydney in 2013, and has earned 44 caps in the black jersey to date, scoring nine tries.

All Blacks Head Coach Steve Hansen said: “Crotts has been one of the mainstays of our midfield for many years and is a world-class footballer.  He’s a very physical, well-balanced rugby player, an outstanding communicator and decision-maker, who runs great lines and has a great pass. He’s been a real asset to the All Blacks, Crusaders and Canterbury and will leave New Zealand rugby at the end of the season with our very best wishes.”

Canterbury Head Coach Joe Maddock said: “Crotts is a proud member of New Brighton Rugby Club, having worked his way up through the grades here in Christchurch. I’m sure I speak on behalf of all Canterbury fans when I thank Crotts for his commitment to red and black rugby over the years, and congratulate him on all he has gone on to achieve at Super Rugby and international level.”