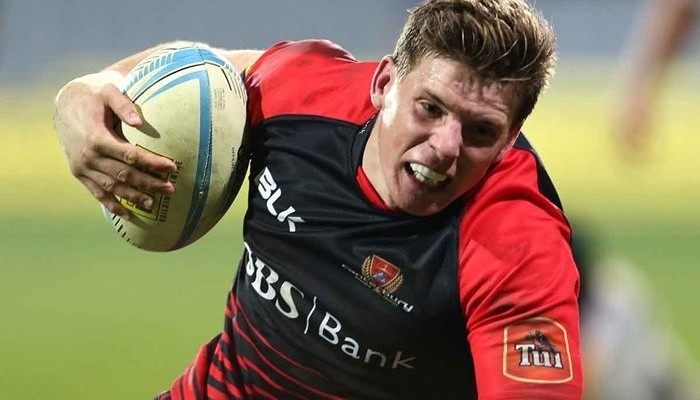 The Crusaders have injected a Fijian flyer and a teenage halfback into their All Blacks-laden Super Rugby squad.
Coach Todd Blackadder has named a typically-powerful squad for 2014, with the last couple of slots to be filled by two uncapped players at this level.
Imposing Fijian back Nemani Nadolo can play on the wing or midfield, making him the ideal signing given the seven-time champions have lost wing Tom Marshall and centre Robbie Fruean to the Chiefs from last year’s squad.
Former Fiji captain Nadolo, 25, was raised in Queensland and won selection in the 2009 Waratahs squad but didn’t play a Super Rugby game.
Stints in England and France were followed by three seasons in Japan.
“At 1.95m and nearly 130kg, he is an absolute hulk of a man, yet he can fly down the field like you wouldn’t believe for a man that size,” Blackadder said.
“Comparisons have been drawn with Jonah Lomu, and we can’t wait to work with him and unleash him in this competition.”
The second uncapped face is lively halfback Mitchell Drummond, 19, who was a member of the New Zealand under-19 touch team and made one appearance last month for NPC champions Canterbury.
Three other players not at the Crusaders last year have Super Rugby experience.
Centre Rey Lee-Lo (Hurricanes) and prop Tim Perry (Blues) both made their debuts last year while first five-eighth Colin Slade returns following three seasons with the Highlanders.

“The experience and talent that Colin Slade adds to this group is immense … he has the advantage of being able to play virtually anywhere in the backline,” Blackadder said.
Slade will contend for the No.10 jersey with Tom Taylor and Tyler Bleyendaal in the absence of All Blacks great Daniel Carter, who will miss most of the season while on a break from rugby.
Carter’s “sabbatical” mirrors that of All Blacks captain Richie McCaw, who returned to rugby late last season to play two games for the Crusaders.
Sixteen of the 32-man squad have played Tests for New Zealand while another three – flanker Luke Whitelock, lock Dominic Bird and prop Joe Moody were all picked for All Blacks tour of Japan and Europe. Moody was subsequently ruled out by injury.
Whitelock and his three brothers – Sam, George and Adam – have all been retained.
Blackadder’s men will hope to end their title drought since 2008.
They have reached the semi-finals in each of the last five seasons but fallen short of claiming an eighth crown.
Crusaders:
Backs: Israel Dagg, Johnny McNicholl, Zac Guildford, Nemani Nadolo, Adam Whitelock, Rey Lee-Lo, Ryan Crotty, Tom Taylor, Daniel Carter, Colin Slade, Tyler Bleyendaal, Andy Ellis, Willi Heinz, Mitchell Drummond.
Forwards: Kieran Read, Jordan Taufua, Richie McCaw, Matt Todd, George Whitelock, Luke Whitelock, Sam Whitelock, Luke Romano, Dominic Bird, Jimmy Tupou, Owen Franks, Nepo Laulala, Wyatt Crockett, Joe Moody, Tim Perry, Corey Flynn, Ben Funnell, Codie Taylor.
Wider training squad: Nafi Tuitavake, Kieron Fonotia, Rob Thompson, Jed Brown, Mike Kainga