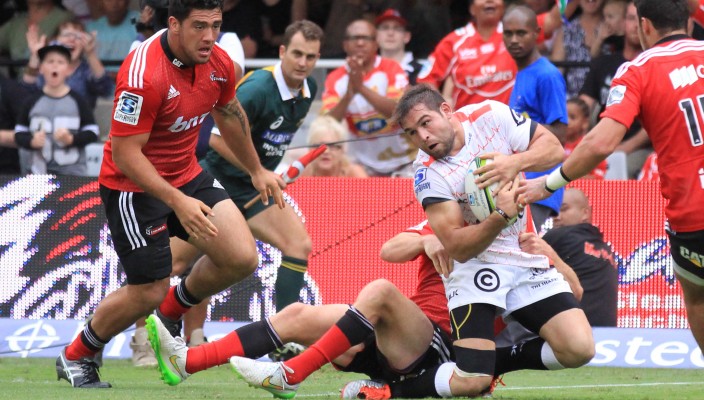 Four cards and a fifty-pointer at Growthpoint KINGS PARK is a strange set of affairs, but somehow the Crusaders managed to score a 52-10 win over the Cell C Sharks in a disappointing match on Saturday afternoon.

There have been no shortage of talking points recently, but four cards in the first half of the clash will no doubt add to the rugby conversation, as the Crusaders were reduced to 12 men towards the end of the half, and The Sharks to 14.

Finding themselves 14-0 down after five minutes of play was certainly not in the script, and it took the Cell C Sharks until the 18th minute before they managed to register their first points, a penalty to Pat Lambie.

Another try to the visitors put the home team under immense pressure and the Crusaders, their confidence buoyed, enjoyed the rub of the green while the home side just couldn’t seem to get their game going.

A few minutes short of half-time, the Crusaders had the bonus point try to compound The Sharks’ woes. The visitors did however suffer the ignominy of two yellow cards in succession, both for illegitimate, dangerous shoulder charges. Then Ndolo was sent off for kicking the ball away after a Sharks penalty had been awarded 5m from the tryline and it was game on with the Crusaders down to 12 men.

The Sharks had the perfect opportunity to strike back, but a scuffle on the ground led to Jean Deysel being red carded and there was sadly no further chance of points before half-time, as the teams went into the change-rooms with the Crusaders leading 28-3 and the home side facing a mountain to climb in the second half.

Sadly the numbers advantage didn’t count as two, quick-fire tries to the Crusaders put them in a commanding lead that would never be caught.

Fred Zeilinga, on for Pat Lambie, was the architect of his team’s first and only try, a long, floating pass missing Ndolo’s outstretched hands by millimetres and Odwa Ndungane did the necessary work to go over.

But sadly there would be no further action and the game fizzled out with the Crusaders benefitting from turn-over ball in their 22 and scoring the final try.

Vodacom Man of the Match Israel Dagg said afterwards: “Luckily it came off tonight, but the scoreboard didn’t reflect how tough it was out there. We knew they would kick to us, we needed to work hard and make the correct decisions. A few gaps opened up and luckily we got a few tries.”

Pat Lambie, captain of the Cell C Sharks said:  “As tough as it was, we’ve very disappointed. We made them look better than they were. We had a slow start and before knew it, we were three tries down and chasing the game. We let ourselves down and we’d like to apologise to our fans, it’s not the performance they deserve to watch.”

Courtesy of The Sharks