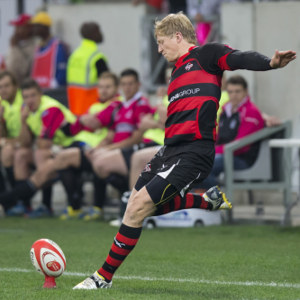 The EP Kings, SWD Eagles and Leopards this weekend all booked their semifinal berths in the Absa Currie Cup First Division alongside log-leaders, the Steval Pumas, with one pool round remaining.

In a decisive weekend the EP Kings took a step closer to securing the remaining home semifinal with a 30-23 victory against the Valke in Port Elizabeth, while the SWD Eagles thumped the Down Touch Griffons 51-28 in Welkom.

The Leopards, meanwhile, cemented their semifinal spot despite going down22-26 against the Border Bulldogs in Potchefstroom as the Regent Boland Cavaliers were knocked out of the running following their 44-21 defeat against the Pumas in Nelspruit. The Pumas are guaranteed the other home semifinal.

With one round remaining the third-placed Eagles and fourth-placed Leopards could switch positions on the log depending on their results next week. The Eagles also have a mathematical chance of securing the other home semifinal. But with the Kings boasting a 107 point advantage on points’ difference, even if the Eagles were to win their final round-robin match with a bonus point and the Kings were to suffer a defeat without a single point, such a move is unlikely.

In Nelspruit a strong first half by the Steval Pumas, which featured three tries, set them in good stead for a convincing victory against the Regent Boland Cavaliers. The team came out firing with two tries in the first 17 minutes, which placed the visitors under immense pressure. Despite this, Cavaliers inside centre Braam Gerber managed to dot down a try which opened up the scoring for his team. But with the momentum favouring the Pumas, the Cavaliers battled to contain them once they had found their rhythm in the second half.

So convincing was the team’s performance, they added four tries after the break to increase their tally for the match to seven. And although the Cavaliers fought back with two of their own, the Pumas were too good on the day. The victory marked the Nelspruit side’s 13th in a row and maintained their unbeaten run in the competition.

The SWD Eagles were equally impressive in their showing against the Down Touch Griffons in Welkom as they powered their way to a 26-14 half-time lead, which paved the way for a resounding victory. The teams were neck-on-neck for the first 28 minutes, with each side crashing over the tryline twice in a thrilling start to the match. But two extra tries by the Eagles before the break earned them their bonus point try and allowed them to work their way onto the front foot.

This bolstered their confidence and placed them in a position to score another brace of four tries after the break, which dashed the Griffons hopes of an upset. As a consolation, however, the home team earned their bonus point for four tries as Japie Nel and Martin Sithole each scored twice.

The EP Kings were made to work hard for their victory against the Valke in Port Elizabeth despite the visitors entering the clash as the last-placed team in the competition. In a surprise showing the Kempton Park side built up a 20-17 half-time lead thanks to two tries, which fullback Kyle Hendricks converted to add to his two penalties.

The Kings, however, bounced back strongly after the break by tightening up their defence and stepping up their attack, which limited the visitors to only three points in the second half. The home team, meanwhile, ran in their third try, while fullback Scott van Breda kept the scoreboard ticking with penalties. This proved to be sufficient to seal the victory.

In Potchefstroom ill-discipline by the Leopards cost them dearly against the Border Bulldogs despite the team scoring four tries to only two by the visitors. Both teams scored two tries in the first half, but two conversions and two penalties by Border fullback Dale Sabbagh handed his team a 20-10 lead.

The Leopards doubled their try tally to four in the second half as prop BG Uys crossed the tryline twice to add to his first-half five-pointer, which secured his hat-trick and a bonus point for his team. But two more penalties by dependable Bulldogs place-kicker Sabbagh cancelled out these efforts and earned his team a satisfying victory.