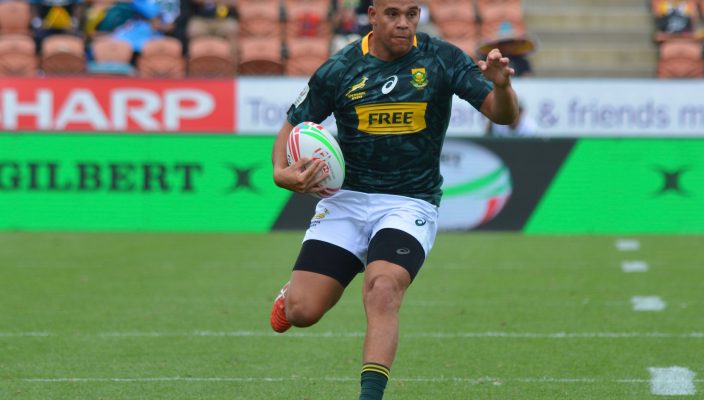 Springbok Sevens forward, Zain Davids, is relishing the experience of starting in the Blitzboks team and embracing the responsibility with great enthusiasm. The 21 year-old prop started all six matches the team played last weekend in Hamilton, which was a new experience for the former Rondebosch Boys High player, especially since that position usually belongs to team captain, Philip Snyman.

This, however, is no longer the case as Blitzboks coach, Neil Powell, continues to find ways to extend the careers of his stalwarts, while also ensuring that the younger players gain more experience with an eye on the future. In Davids’ case, the coach felt he was ready to start after accumulating 15 tournament caps thus far, and playing in the Rugby Sevens World Cup last year.

Davids, who is determined not to fluff this opportunity, said: “It was a big surprise when coach told me I will be starting. We are a squad and a family, so we have each other’s backs, but I still didn’t expected it, as Philip is the captain.

“Even Philip supported the decision, and that made me very proud and humble.

The two time gold medal HSBC World Rugby World Series winner, who made his Blitzboks’ debut in 2017, added: “I trust the processes in the team and I know that will comfort me in games. The rest of the squad will also look after me, just as I look after them.”

The vote of confidence and support from his captain was a particularly huge boost for Davids, who also represented the Junior Springboks as a looseforward.

“Hearing from Philip that he backed me to take up a starting berth meant a lot,” he said. “I am very determined to make sure I don’t disappoint that trust. These are big shoes to fill, but I will do my absolute best to contribute in my new role,” said Davids.

Veteran sweeper Branco du Preez, meanwhile, said the team’s attention to detail will come under scrutiny this week, as they prepare for the HSBC Sydney7s, which marks the fourth of ten tournaments.

“We are not far off in terms of what we are doing, but I do feel we are not executing as well as we can,” Du Preez said. “We know what works for us, and we still believe in that, but the small details are not being applied properly.”

Du Preez, who will be playing in his 65th tournament for South Africa, said if the team could improve on the finer details of their game, there is no reason why they cannot return home on Monday with smiles on their faces.

“We were a bit rushed at times in Hamilton and that cramped our style,” he said. “Taking a step back in order to take two forward will work fine for us, I believe.”